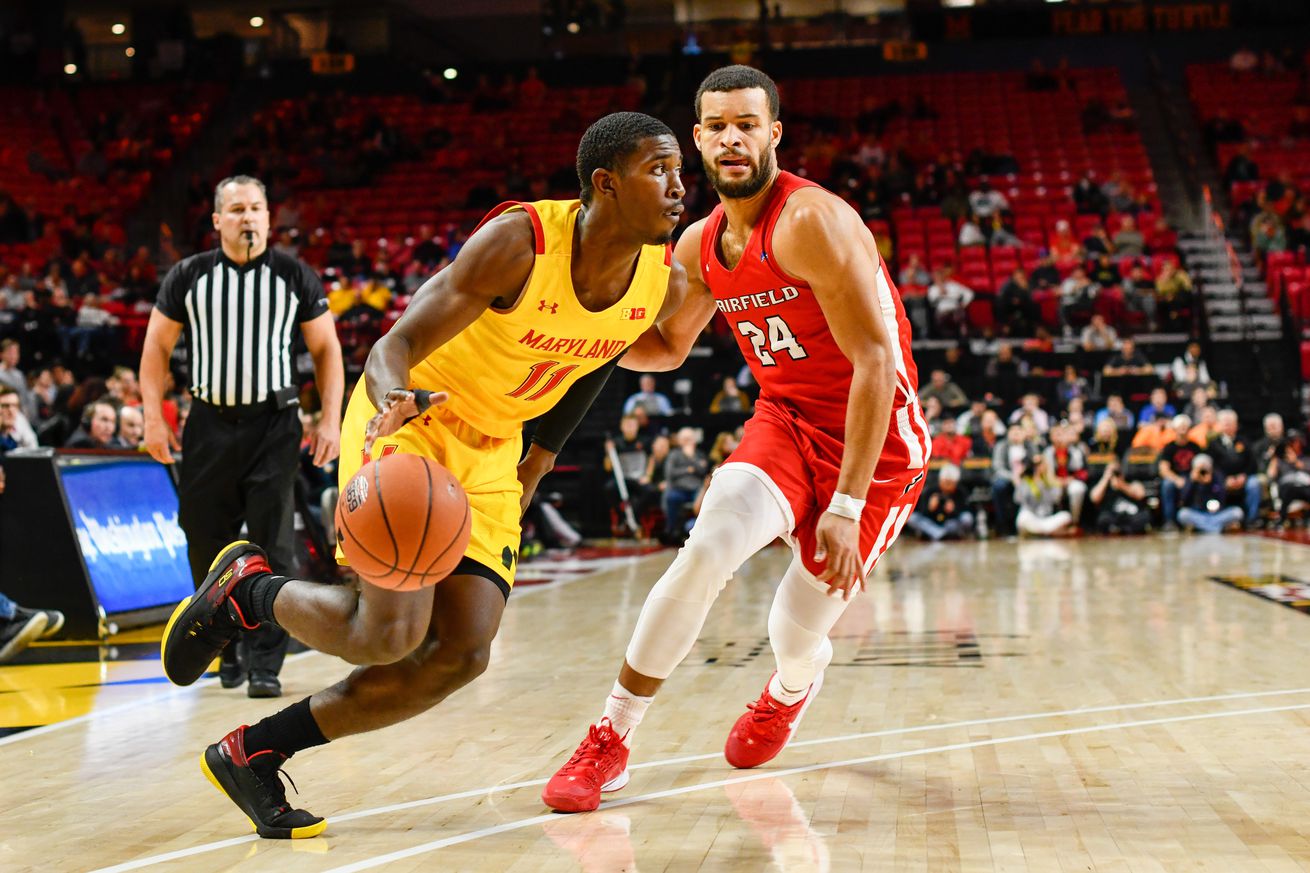 No. 6 Maryland men’s basketball will hope to continue its nonconference winning ways when it hosts the George Mason Patriots Friday night.

Coming off a commanding 74-55 win versus Fairfield on Nov. 19, the Terps have now won all four of their games in this early season by 18+ points as they continue their march upwards in the AP Top 25 Poll.

The victory over Fairfield saw several outstanding individual performances, including that of sophomore guard Eric Ayala, who came off the bench to score 13 points. Jalen Smith nearly had his third triple-double in four games, scoring 17 points and grabbing eight rebounds. Ricky Lindo Jr. played a season-high 21 minutes from the bench and promptly cashed in 100 percent of his six shot attempts, scoring 13 points to pair with seven boards.

The Terps will likely continue to see several bench players get significant minutes against George Mason as they get a better understanding of the roster structure with Big Ten play looming in December.

Maryland has dominated George Mason throughout program history, winning all eight matchups with the Patriots dating back to the 1981-82 season.

The game will be televised on BTN.

Tilted Bench is back with its second episode, featuring former Terp Andrew Terrell.

Maryland men’s soccer beat Iona 4-0 in the first round of the NCAA Tournament on Thursday night. The Terps will now travel to Winston-Salem, North Carolina, to take on Wake Forest.

No. 9 Maryland women’s basketball won its fourth game of the season on Wednesday in an 88-54 victory over George Washington. Here are some of the biggest things we noticed from that game.

Sarah also spent some time at the Xfinity Center, witnessing the Terps’ huge victory. Here were some of her best photos from the victory.

Anthony Cowan Jr. now has his name engraved next to some elite company.

Ahead of Maryland football’s senior day against Nebraska on Saturday, the team gave out some more senior superlatives.

No. 9 Maryland women’s basketball picked up its third consecutive victory against George Washington on Wednesday. Here are some of the highlights from the victory.

Sarah was on the sidelines for Maryland men’s soccer’s NCAA Tournament win to capture all the action.

Maryland head coach Sasho Cirovski’s message to his squad after taking down Iona 4-0 in the first round of the NCAA Tournament.

Sunday is Senior Day for Maryland volleyball, so the team continued its Twitter series with Taylor Smith.

Help us recognize Taylor Smith and our other seniors during Senior Day on Sunday vs. Northwestern!#FearTheTurtle pic.twitter.com/NPEthpG5Rv

Maryland wrestling head coach Alex Clemsen is back for Clemsen’s Corner, describing what his team did this past weekend and what can be expected going forward.

Another solid weekend of competition in the books!

I’ll beat ALL games, & the donations will help the homeless children at Sarah’s House in Fort Meade, MD! pic.twitter.com/qg3kEgjNbN