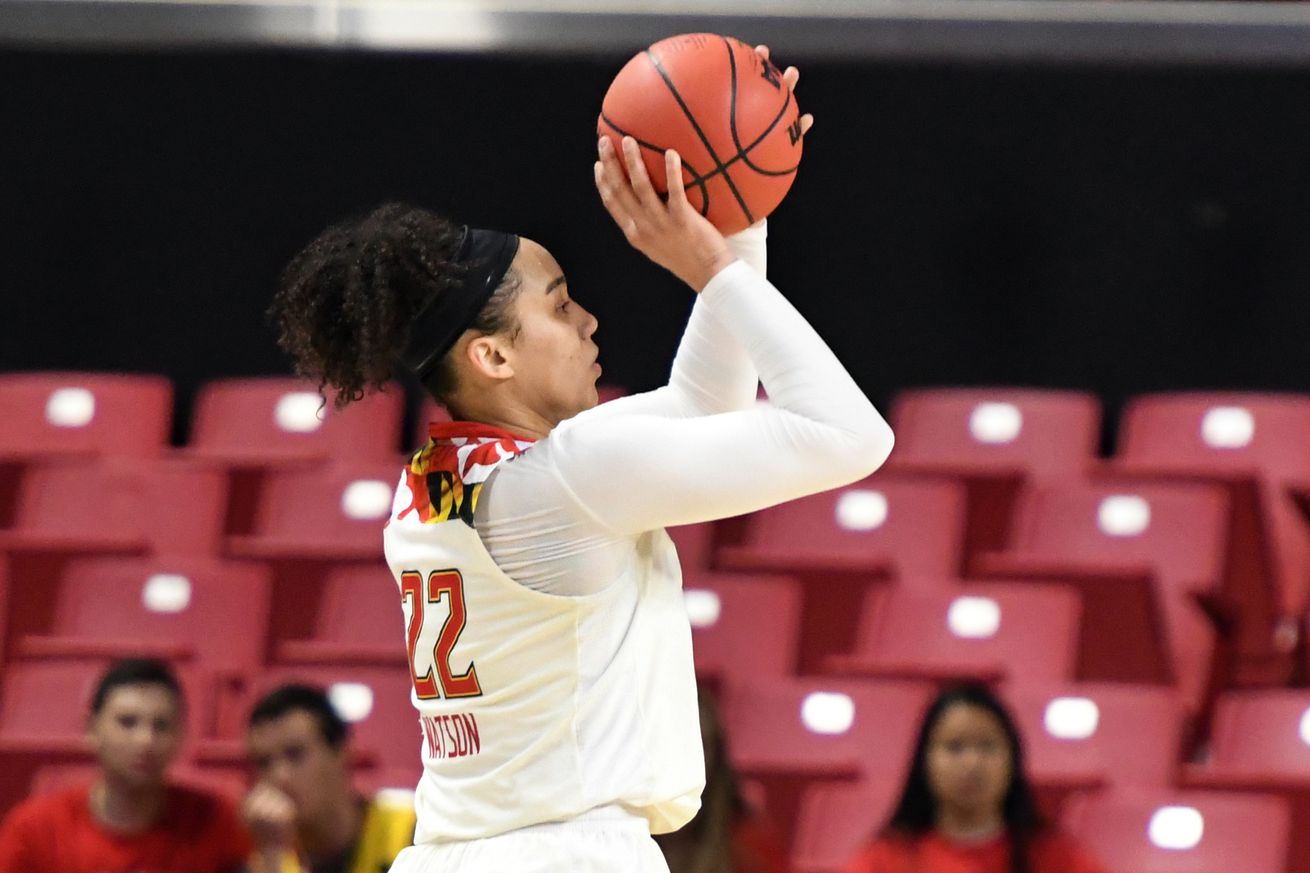 The Terps close out their nonconference schedule with a thoroughly dominant victory.

In its first game action in over a week, No. 13 Maryland women’s basketball was poised to make a statement in its final nonconference game of the season Wednesday afternoon.

At the 7:56 mark of the first quarter, sophomore forward Shakira Austin swatted a would-be layup by Georgia State guard Tehya Lyons. Senior guard Kaila Charles collected the rebound to spark the fast break, taking it the length of the floor before dumping it to off to Blair Watson for the easy layup.

Watson’s bucket was two of 11 first quarter points for the senior guard, connecting on a trio of three-point attempts to help the Terps start the game on a 14-2 run. Maryland’s double-digit lead was never threatened from that point on, blowing out Georgia State 114-41 — its largest margin of victory of the season.

“I thought it was our most complete game to date,” head coach Brenda Frese said. “Direct reflection to the week of practice we had going into this game … that’s what you wanna see going into conference play.”

Watson led all scorers in this one, notching 23 points on 7-for-10 shooting from beyond the arc to come just a point shy of tying her career-high. Sophomore guard Taylor Mikesell also lit up it from deep, tying a career-high with 23 points with seven of her eleven shots from three point range finding the bottom of the net.

Four other Terps scored double-figure points as well, with Charles and Austin tallying 13 and 10 respectively, while forwards Stephanie Jones and Faith Masonius added 14 and 11 points each.

The Panthers (1-8) came into the matchup looking to put their defensive mettle to the test against the best opponent they are set to play all season. Utilizing a 1-2-2 zone, Georgia State head coach Gene Hill appeared to be making a concerted effort to closeout hard on Maryland shooters.

But with the height advantage and quick release ability the likes of Watson and Mikesell both possessed over closing out defenders, the Terps were able to simply shoot over the Georgia State zone time and time again.

Following her strong first quarter, Watson returned to the floor at the outset of the second looking to continue to impose her will on both ends of the floor. Manning the top of the Terp full-court press, she hounded any ball-handler that tried to make it past half court.

Watson tallied three steals in both the first and second quarters to give her a half dozen before the halftime break, sinking three more shots from deep as well to give her a season-high 20 points and the Terps a 57-17 lead at the half.

Needing just five points to set a new career-high, Watson took the floor once again at the start of the second half eager to continue launching them from deep. But as the Georgia State defense tried to force anyone but Watson to beat them, it opened up the floor for Mikesell.

Following a missed jumper on the other end, Charles again secured the rebound and started the break, barreling down the center of the floor at the GSU Sports Arena before dishing it to a wide-open Mikesell on the wing.

The sophomore quickly fired it up before the defense could react, sinking her second three-pointer of the quarter to match Watson’s scoring total at 20 and give Maryland its most made three-pointers made this season with 13. The Terps finished the game with 15 made shots from behind the arc.

1. Georgia State couldn’t even get into its press. The big thing on the scouting report on the Panthers was that they can give opposing teams fits if their full-court press got going. That never had a chance to happen on Wednesday, as Georgia State’s lack of early field goals (just one in the first five minutes of play) put it behind early while Maryland’s upbeat tempo kept the Panthers from ever trying to put on the press.

By not using one of its best weapons to slow down opposing teams, Maryland’s offense was able to get whatever they wanted in this one.

2. Maryland did its job on the boards. Rebounding on both ends of the floor has been an issue for Maryland all season, but such wasn’t the case on Wednesday. Georgia State forward Taylor Hosendove came into this one averaging 12.3 rebounds per game and 6.3 offensive rebounds per game, marks that put her in the top-5 in Division I in both of those categories.

But Austin and senior forward Stephanie Jones controlled the glass from start to finish, combining for 21 rebounds on the afternoon to help Maryland win the rebounding battle, 49-24.

3. Maryland’s turnover margin continues to grow. Having forced 20-plus turnovers in each of its last eight contests, Wednesday’s game marked the ninth straight game in which Maryland was able to break its opponent with its press. The Panthers committed 31 turnovers on the afternoon, the most they’ve committed in a single game all season to contribute to 39 points for the Terps.