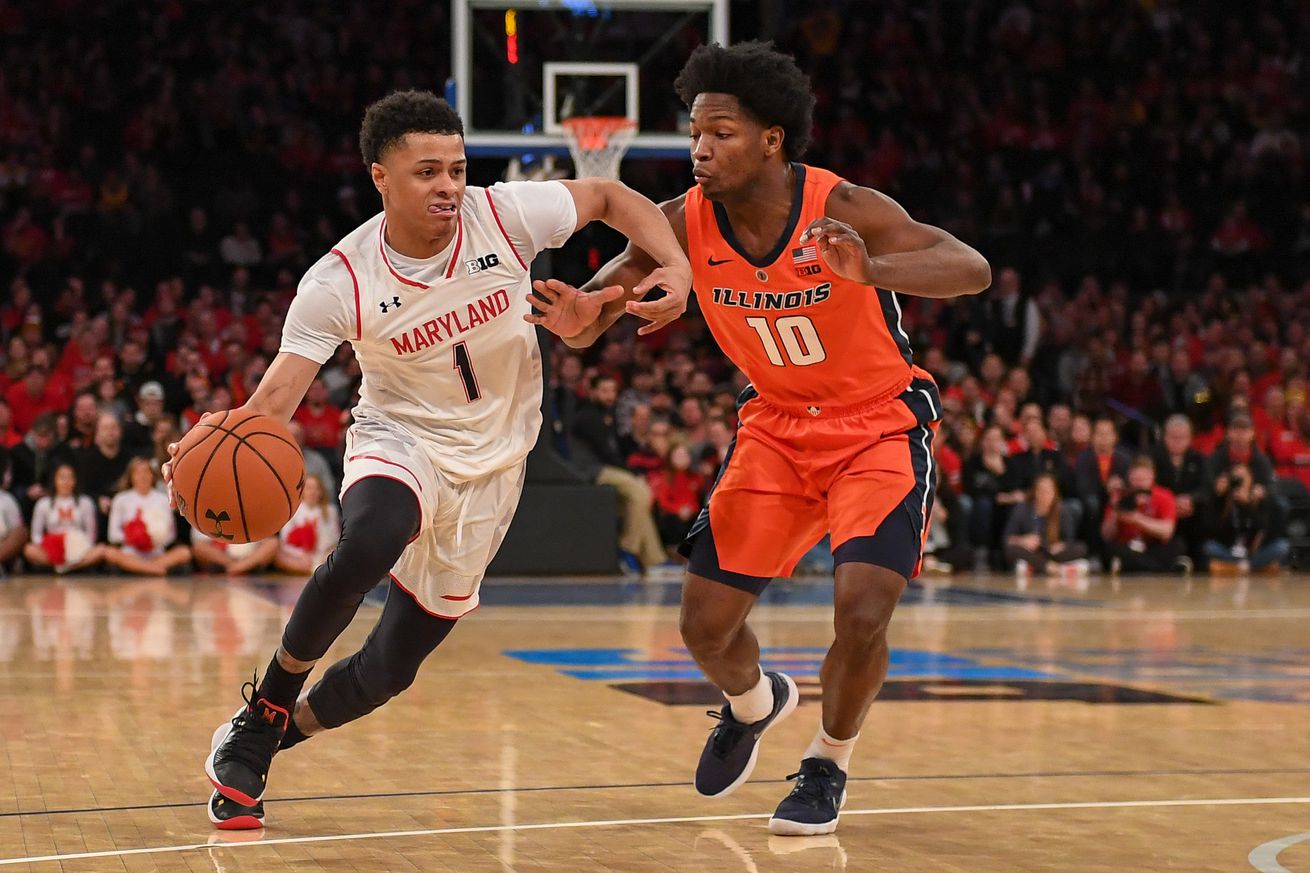 Round two of fight week continues against the Fighting Illini.

It has been a busy week for No. 3 Maryland men’s basketball. After winning the Orlando Invitational championship, being named the No. 3 team in the nation in the latest AP Top 25 poll and getting a victory in the Big Ten/ ACC Challenge for the first time since switching conferences, the Terps will face their first Big Ten foe of the season.

Since joining the conference, Maryland has won four of its five Big Ten openers. The team will be looking to improve to 10-0 for the first time since the 1998-99 season and improve on a 9-6 all-time record against Illinois.

In last year’s matchup, Fighting Illini received an explosion of offense from their bench, which scored 37 points, to beat Maryland, 78-67, at Madison Square Garden. Though, the Terps did not help themselves, committing 21 turnovers and allowing the Illini to score 27 points off those mistakes.

Illinois arrives to College Park after losing to Miami, 81-79, in the Big Ten/ACC Challenge — its second loss of the season.

“I don’t think there’s any question that these games have a little bit different feel to them,” head coach Mark Turgeon said. “Especially with Illinois coming off a loss — we expect they will be fired up and ready to go.”

Saturday’s tipoff is scheduled for 5 p.m. ET and the game will be broadcast on ESPN2.

Head coach Brad Underwood is in his third season as the head coach of the Fighting Illini. In his first two years at the helm, Underwood has a 26-39 overall record. Before arriving to Champaign, Illinois, he was the head coach at Oklahoma State, leading the Cowboys to a 20-win season and a NCAA Tournament appearance during the 2016-17 season — a huge improvement from their 12-20 record the season prior.

Kofi Cockburn, freshman center, 7’0, 290 lbs, No. 21 Although he is only a freshman, Cockburn is the leading scorer and rebounder for Illinois. The Kingston, Jamaica, native averages 16.3 points and 11 rebounds per contest, which ranks fifth and first in the Big Ten, respectively. Against Miami in the Big Ten/ACC Challenge on Nov. 2, Cockburn delivered a season-high 23 points.

“He’s a good player, a good big man,” freshman forward Donta Scott said. “We’ve just got to work together, go over the gameplan and pay attention to detail together.”

Cockburn, a four-star recruit out of Oak Hill Academy in Virginia, is the highest-rated post player to join the Illini since Meyer Leonard, who is currently a member of the Miami Heat. Cockburn was rated the No. 9 center from the class of 2019 by Rivals.

Ayo Dosunmu, sophomore guard, 6’5, 185 lbs, No. 11 After a freshman campaign that earned him Big Ten All-Freshman Team and All-Big Ten honorable mention honors, Dosunmu has returned to Champaign and is putting up even better numbers. The Chicago native is currently second on the team in points (15.8) and assists (3.5) per game. On Saturday, Dosunmu is expect to be on the court most of the game, averaging a team-high 31 minutes per contest.

Tevian Jones, sophomore guard, 6’7, 205 lbs, No. 5 Jones missed Illinois’ first eight games of the season due violations of team academic policies. But for the first time this season, the sophomore guard will be suiting up against the Terps on Saturday, Underwood announced on Friday.

In last year’s matchup with Maryland, Jones erupted for a career-high 18 points — the second-most on the team. He completed the season averaging 3.5 points and 1.4 assists per contest.

Rebounding. With a good amount of size on their team — five players over 6’7 — the Fighting Illini hit the boards hard. Compared to the rest of the conference, they rank fifth in defensive rebounding (29.1 rpg) and first in offensive rebounding (14.6). Against a team like Maryland, which allows 13.2 offensive rebounds per game, Illinois will attempt to take advantage of the glass in a matchup that appears very physical. The team currently owns a +17.4 rebounding margin, which leads the Big Ten and the nation.

Blocked shots. Despite being a team that is able to fly and grab boards, Illinois does not block very many shots. The Fighting Illini average 2.5 blocks per game, which is second-to-last in the conference. Maryland should be able to take advantage of this aspect of its Big Ten foe with its aggressive approach that guards Eric Ayala and Aaron Wiggins demonstrated on Wednesday.

Against Notre Dame, Morsell spent time guarding the Irish’s best player in 6’9 John Mooney. Illinois presents a similar lineup with Cockburn starting at center and 6’9 Giorgi Bezhanishvili starting alongside him in the front court.

Turgeon could take the same approach that he did against Notre Dame with Morsell guarding Bezhanishvili, or he could begin the game with one of the Mitchell twins in the starting lineup.

2. How will the Terp fare against a fast team? Along with rebounding the basketball, Illinois’ other strength is pushing the basketball. The Fighting Illini play a fast-paced style of basketball — similiar to the Terps — and average 20.5 points per game in transition.

Maryland possesses the depth to keep up with Illinois and it will be relied on to limit the Fighting Illini’s speed.

“[They] are arguably the fastest team we’re going to play all year,” Turgeon said. “No we’re not going to stop all transition tomorrow … but if we can be great in transition that will definitely help us.”

3. Do the Terps come in looking for revenge? Maryland’s loss to Illinois at Madison Square Garden last season featured arguably one of its worst performances of the year. The team came in heavily favored with the Illini at the bottom of the conference, but played sloppy throughout and allowed way too many easy buckets. Now with a No. 3 ranking next to their name, how motivated will the Terps be to prove that game was a fluke?

“That was a tough one last year for us. So this year, we gotta take advantage. … We got to make sure that we’re ready to go,” Wiggins said. “I wouldn’t say it’s a revenge game. It’s a new season, we just want to make sure we get off to a good start in Big Ten play.”