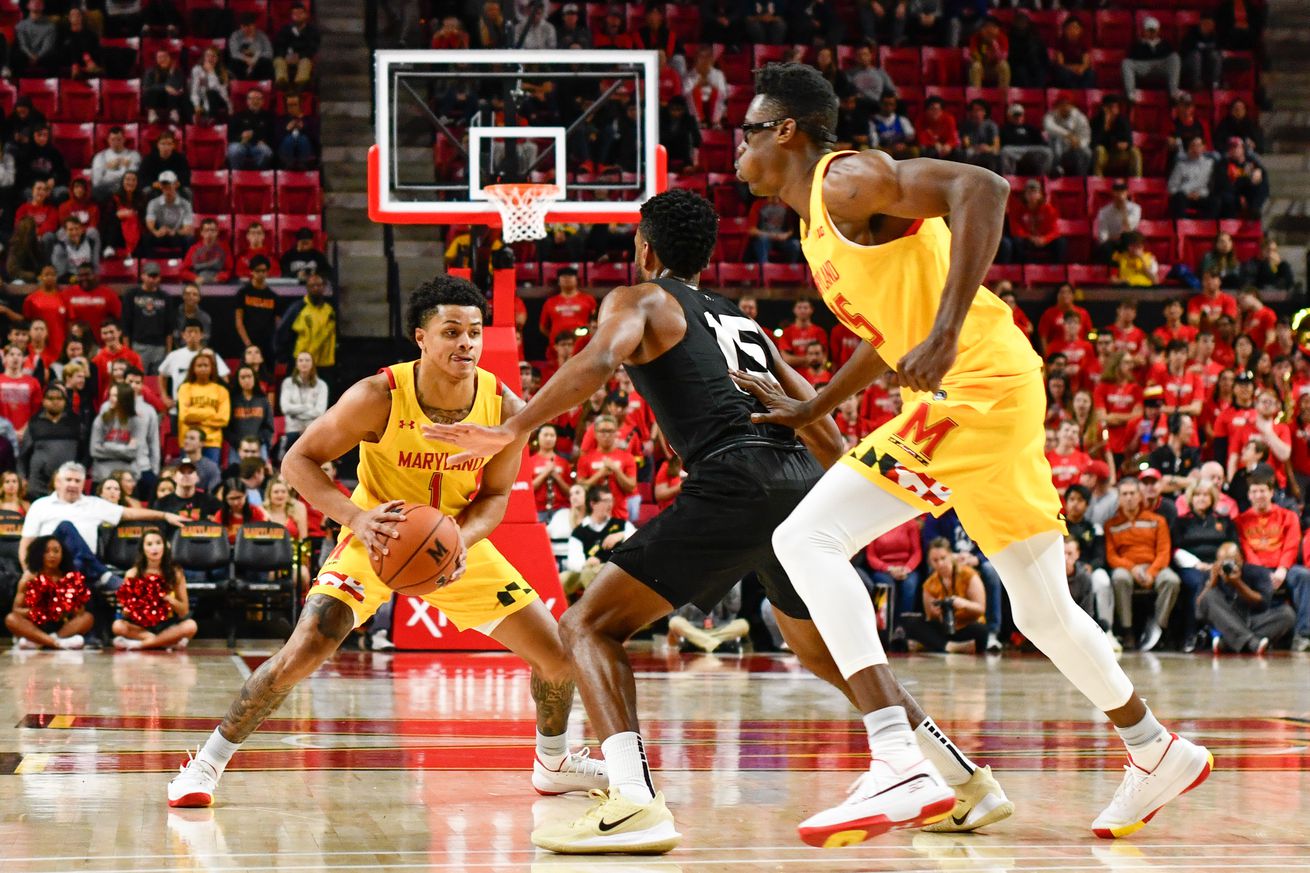 The Terps take on the Fighting Irish in the 2019 Big Ten/ACC Challenge Wednesday night.

Maryland men’s basketball will test out its No. 3 ranking in its 2019 Big Ten/ACC Challenge matchup against Notre Dame Wednesday night.

While it certainly isn’t the opponent Terp fans were likely hoping for — this would have been the perfect year for Louisville — it should be a good test nonetheless.

Notre Dame leads the all-time series 11-9, but Maryland is 5-3 on home court in those matchups. The two teams haven’t played each other since January 2014, when the Terps won 74-66.

Head coach Mike Brey is the all-time winningest coach for the Fighting Irish program, now in his 20th season at the helm. Before the start of 2019-20, Brey had 417 wins in South Bend, becoming the first coach in program history to reach 400 victories. He’s led Notre Dame to 12 NCAA Tournament appearances, three Sweet Sixteen showings, two Elite Eights and the 2015 ACC Championship.

John Mooney, senior forward, 6’9, 245 lbs, No. 33 Mooney is the clear leader for the Fighting Irish, first on the squad in both scoring and rebounding. The senior averages 14.3 points per game, but his numbers on the boards are what really impresses. Mooney grabs 13.0 rebounds per contest, which ranks first in the ACC and third in the nation. He’s had four straight games with 14 or more boards.

The one weakness for Mooney is that he shoots a measly 43.5 percent from the free throw line, which Maryland should look to take advantage of.

Prentiss Hubb, sophomore guard, 6’3, 174 lbs, No. 3 Hubb leads Notre Dame in assists, averaging 4.4 per game. The sophomore guard is also third on the team in scoring, putting up 9.9 points a night.

Hubb is quite the familiar face for Maryland players Anthony Cowan Jr. and Reese Mona. The two Terps played at St. John’s Catholic High School while Hubb played at rival Gonzaga College High School. There were a lot of heated matchups between the two teams, and that could add an extra intensity for Cowan in this matchup as the pair square off for the first time since high school.

“It’s always fun to play against somebody from the area, especially someone who’s been successful so far in his career,” Cowan said. “I’m definitely proud of him and excited to go up against him tomorrow.”

T.J. Gibbs, senior guard, 6’3, 185 lbs, No. 10 Another senior focal point for Notre Dame, Gibbs averages the most minutes of anyone on the team at 33.3 minutes a night. He is second on the Fighting Irish in scoring, putting up 12 points per game, along with 3.6 rebounds.

Clean basketball. Brey coached teams are known for defending without fouling, and that remains true this season. Notre Dame ranks eighth in the country in personal fouls per game, only committing 11.7 per contest behind No. 5 Virginia.

The Fighting Irish are thoughtful and composed on the offensive end too, boasting the best turnover margin (5.9) in the ACC. The team averages 9.4 turnovers per game, while forcing opponents into 15.3 errors. Additionally, Notre Dame sits atop the ACC in assist/turnover ratio at 1.8, averaging 17.1 assists per game (which is second in the conference behind the Cavaliers).

“It’s really an art to one take care of the ball…these guys can really pass it,” Turgeon said. “To not foul is an amazing thing to do. Hopefully, in this building, we can put some foul pressure on them. Hopefully we can flip that tomorrow night and get to the foul line a little bit.”

Shooting percentage. Notre Dame hasn’t shot the ball well so far this season. The Fighting Irish rank 12th in the ACC with a 41.7 percent shooting clip from the floor. They also are 11th in the conference in three-point percentage, only making 31.6 percent of their attempts from behind the arc.

1. Can Maryland build off its performance against Marquette? The Terps put together their most complete performance of the season in their 84-63 takedown of Marquette to win the Orlando Invitational championship this past Sunday. They got off to a faster start and held their largest lead at halftime of the year so far. Can Maryland use that confidence boost to keep it going and establish its dominance early against Notre Dame?

“[It gives us] confidence for sure, but I think we just want to keep moving forward,” Eric Ayala said. “Taking it one game at a time, you know not dwelling. Obviously, it’s a big, big accomplishment, we just won that championship, but we got a long season ahead. We can’t just that let that sink in … we’ve got to get ready for tomorrow.”

2. How does Jalen Smith defend down low? Smith will face the best opponent he has in the paint so far in 2019, likely going up against Mooney. Last season, Bruno Fernando was the go-to defender for such talented big men down low. With some added muscle and a string of good performances manning the paint so far, can Smith limit the Fighting Irish’s leading scorer and rebounder?

3. Will the Terps stop history from repeating itself? While it’s been quite some time since Maryland last faced Notre Dame as a top-10 team, it hasn’t gone very well previously. The Fighting Irish knocked off the Terps in each of the last four such occurrences. Here’s a look at those matchups, the most recent of which was in 2002.