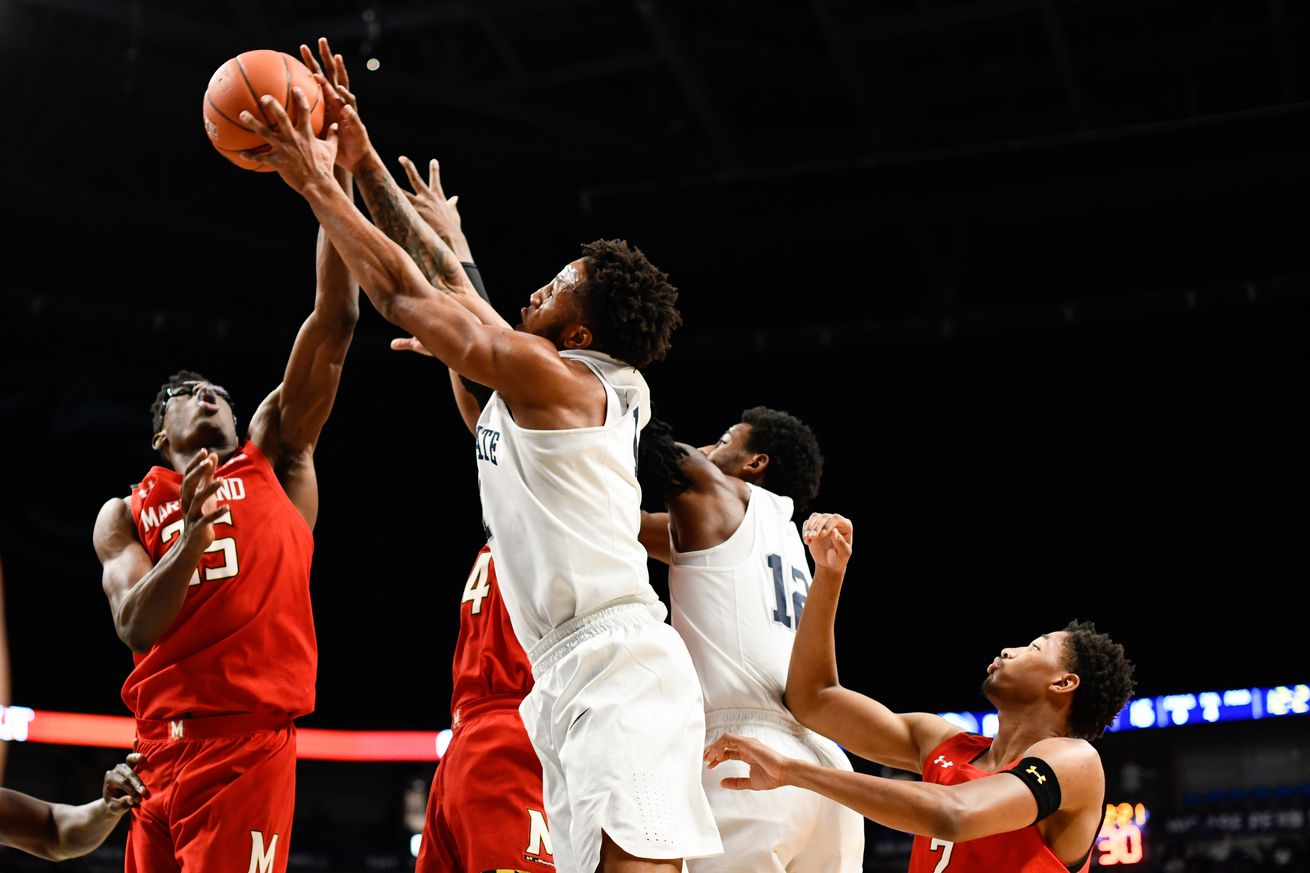 The Terps suffer their first loss of the season at the hands of the Nittany Lions.

STATE COLLEGE, Pa. — With under eight minutes remaining and No. 4 Maryland men’s basketball down by six points to Penn State, Anthony Cowan Jr. looked to get something going.

Two Nittany Lion defenders closed in on the senior point guard as he dribbled outside, so Cowan attempted to throw a pass Jalen Smith’s way. But Penn State’s Izaiah Brockington sprinted to grab the ball from the reach of Smith, then charged down to the other end and threw down a slam dunk to extend the deficit.

The Terps were plagued by a season-high 20 turnovers Tuesday night, completely hindering their offense en route to an 76-69 loss — ending their undefeated streak to start the season.

“[We were] just dribbling it a lot, over-dribbling. Credit their defense. They played well on the defensive end, they had us well-scouted,” Eric Ayala said. “It was just one of those nights.”

Through the first five minutes of the contest, it looked as if Maryland might not fall prey to getting in an early hole at Bryce Jordan Center, locked in a one-point game.

But that didn’t last for long. The Terps turned the ball over seven times in a little over five minutes, allowing the Nittany Lions to go on a 9-0 run and take a 20-10 lead with 11:08 remaining in the half.

It soon became 12 turnovers in 12 minutes, completely halting any chance of Maryland getting anything going offensively. The team was averaging 11.4 turnovers per game entering this one.

The Terps managed to get a 7-0 run in less than two minutes, but couldn’t extend the streak, eventually entering the break down 40-30.

Maryland ended the first half with more turnovers committed than field goals made, giving the ball away 13 times while finding the net 11 times. Penn State, on the other hand, only had three turnovers and managed to score 18 of its points off of the Terps’ mistakes. The Nittany Lions finished with 22 points off Terp turnovers.

“We’ve got a long ways to go offensively. And we’re struggling a little bit,” head coach Mark Turgeon said. “We can’t make layups and we can’t make open shots. It’s been that way for 11 games now.”

The Terps were able to shorten the Nittany Lion lead significantly in the second half, but it was a slow crawl that never materialized as their opponent refused to go on scoring droughts for long.

Cowan sunk a three-pointer after it rolled around the rim a bit, shortening the lead to 52-50 with 10:57 left in the game to cap off a 6-0 Maryland run, but Penn State quickly responded with six consecutive points of its own.

“We competed that second half,” Turgeon said. “We tried as hard as we could try. We just couldn’t get over the hump.”

As time dwindled down, the Terps’ shot at starting the season 11-0 for the first time since 1996-97 fell further out of reach. Maryland didn’t make a single field goal over a 6:10 span towards the end of the half, finishing the contest going 3-of-18 from the floor over the final 10 minutes.

Once, the game clock struck zero, Nittany Lions fans poured onto the court in celebration of knocking off the No. 4 team in the country while the Terps quickly rushed to the locker room. The team’s best start since 1998-99 has reached its end.

“It’s frustrating because, you know, just a little bit more focus would probably get you over the hump,” Ayala said. “We all go through it. We all have little things that we could probably just take back. It’s tough, but the thing about basketball, you’ve got another game coming up. So I appreciate that, and I’m just looking forward to the next game.”

1. Eric Ayala kept the Terps in this one early. After Jalen Smith got Maryland going with a three-pointer to start the game, Ayala scored seven consecutive points for the team on 3-for-4 shooting to keep it close to start.

“[We were] struggling to score. He kind of took it upon himself to really keep up in the game,” Cowan said. “That’s what we need for him. He stepped up huge, especially in his sophomore year, so I’m proud of him.”

3. Makhi Mitchell doesn’t look ready to start. Turgeon opted to go with a different starting lineup Tuesday night, kicking things off with Cowan, Ayala, Aaron Wiggins, Makhi Mitchell and Jalen Smith in hopes of a height-advantage. But the change didn’t help the Terps much.

Mitchell committed two turnovers and had a shot blocked in the first five minutes, unable to get any points on the board during that span. He ended the contest with three turnovers without converting on any of his four shots, but did contribute six rebounds in his 16 minutes played.