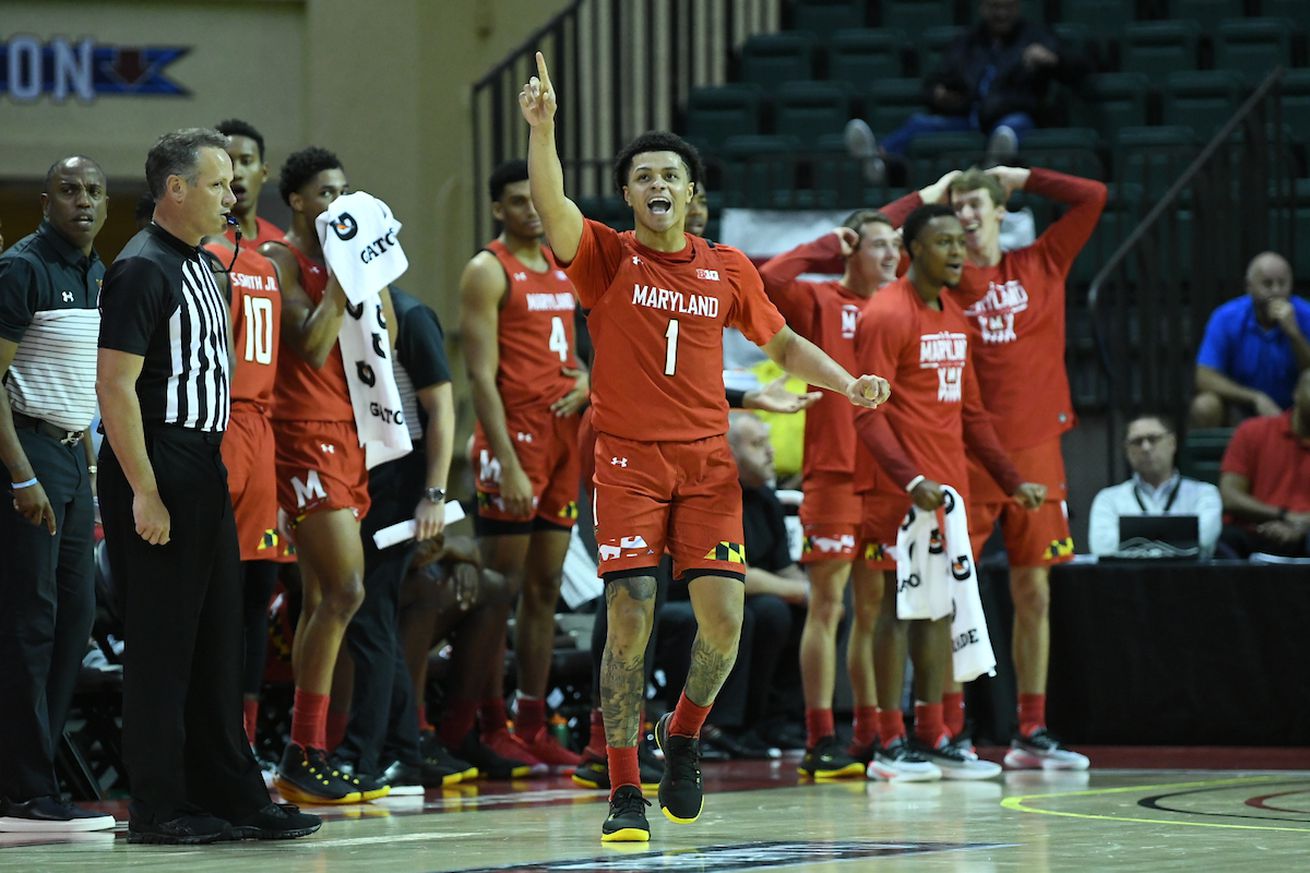 The Terps move on to the finals of the Orlando Invitational.

ORLANDO, Fla. — With Maryland narrowly ahead 61-59 with 6:12 to play, Jalen Smith came up to the left wing to set a screen for Aaron Wiggins. Wiggins drove right before he dumped the ball off to a wide-open Smith rolling to the basket.

The 6’10 big man hauled in the pass and jumped as high as he could, using two hands to slam a dunk over 6’8 forward Noah Kirkwood and send the crowd into a frenzy. Less than 90 seconds later, Wiggins had his own dunk on a putback, extending Maryland’s lead to 65-59 with under five minutes to play.

The Terps had nearly crawled away several times prior, but the pair of slams kicked off a 10-3 Maryland run that finally buried Harvard, giving them a lead they’d never relinquish in a 80-73 win over the Crimson.

Smith and Wiggins were held quiet in the first half, combining for nine points on 3-of-11 shooting with three turnovers. But the duo paired up to push Maryland ahead to the semifinals of the Orlando Invitational and keep the team undefeated.

“[Aaron] really came out aggressive early in the second half, and he also hit a big three in the corner. I was super happy for him,” Anthony Cowan Jr. said. “[Smith] knows when he gets low down there not many people can guard him. We figured that out and started scoring the ball with confidence.”

They weren’t the only ones who flipped a switch in the second half. Cowan — fresh off a career-high 30-point performance against Temple — was held to just three first-half points. But he broke out for 17 points after the break, more than half of which came in a two-minute span.

After a Chris Lewis layup inside with 8:23 to go in the game, Maryland and Harvard were locked in a tie at 58. The Terps had clawed back from an early 11-point deficit to take a lead a few minutes prior, but they couldn’t put the Crimson away for good.

Wiggins secured the rebound off a Harvard miss with 9:38 left in the game and immediately passed the ball to Cowan, who secured the pass and stopped at the top of the three-point arc, allowing his defender to run right by.

The senior then set his feet, paused for a moment and launched a deep three-pointer that hit nothing but net, swishing through the bottom of the basket to give Maryland a 56-53 lead.

The triple capped off a 12-2 run for the Terps, buoyed by 10 points from Cowan in less than two minutes.

“Anthony bailed us out — made incredible threes,” head coach Mark Turgeon said. “And when the game was on the line, our half-court execution was better.”

The run started when walk-on Reese Mona checked into the game, perhaps a way of Turgeon sending a message to the rest of his team. The substitution instantly energized the bench and the crowd, and that translated to the play on the court.

“I loved it,” Darryl Morsell said regarding Mona’s contribution. “We were all excited for him. He does that same stuff in practice all the time, so we’re confident him. … It’s just good to see him have a big impact on this one.”

As has become the norm for Maryland, it got off to a slow start against Harvard. The Terps trailed by 11 at their worst, facing a 23-12 deficit with just under seven minutes remaining in the first half. The team clawed back with a couple short bursts, but it couldn’t quite pull ahead as it did in the first five games of the season.

The Terps were within striking distance the entire time, but poor shooting and untimely turnovers kept them from putting the Crimson in their rear view mirror. Maryland shot just 10-of-30 from the field — 1-of-10 from three — and turned the ball over 11 times in the first 20 minutes.

Morsell did all he could to keep the score close, scoring six points with seven rebounds — three offensive — with a block. He ultimately finished with the first double-double of his career, scoring 13 points with 12 rebounds to lead the Terps on the boards.

Maryland trailed for the first 10 minutes of the second half as well, but thanks to some timely contributions from Smith, Wiggins and Cowan, its undefeated record didn’t come to an end in Orlando.

1. Poor three-point shooting early on was costly. At a certain point, the Terps are what they are. Entering Friday, they were shooting just 30.5 percent from beyond the arc, third-worst in the Big Ten and outside the top-250 in the country. Maryland’s poor long-range shooting was on full display against Harvard, as it made just one of its 10 attempts in the first half. The Terps finished 7-of-20 from long range, finally hitting some threes at the right time, but a poor 30 minutes from deep were almost too much to overcome.

2. Both teams left points on the board. We’re talking free throws, folks. Maryland went 25-for-40 from the line Friday, which kept it from breaking away at the end of the first half. Harvard wasn’t great from the charity stripe either, making 11 of its 17 attempts.

3. Maryland had no answers for Bryce Aiken. Against the Terps, Aiken was utterly dominant, scoring 15 points in the first half on 5-of-9 shooting, draining a triple while getting to the line often. By the final buzzer, Aiken was the game’s leading scorer with 30 points, going 10-of-18 from the field and 3-of-7 from three-point territory. However, he didn’t do much in the way of facilitating from his point guard position, turning the ball over four times and failing to register a single assist.

“Bryce can score with the best of them, no doubt about it,” Harvard head coach Tommy Amaker. “But he can be better than that, certainly in other areas — quarterbacking our team and leading our team. Those are the areas we need him to embrace a little bit more.”