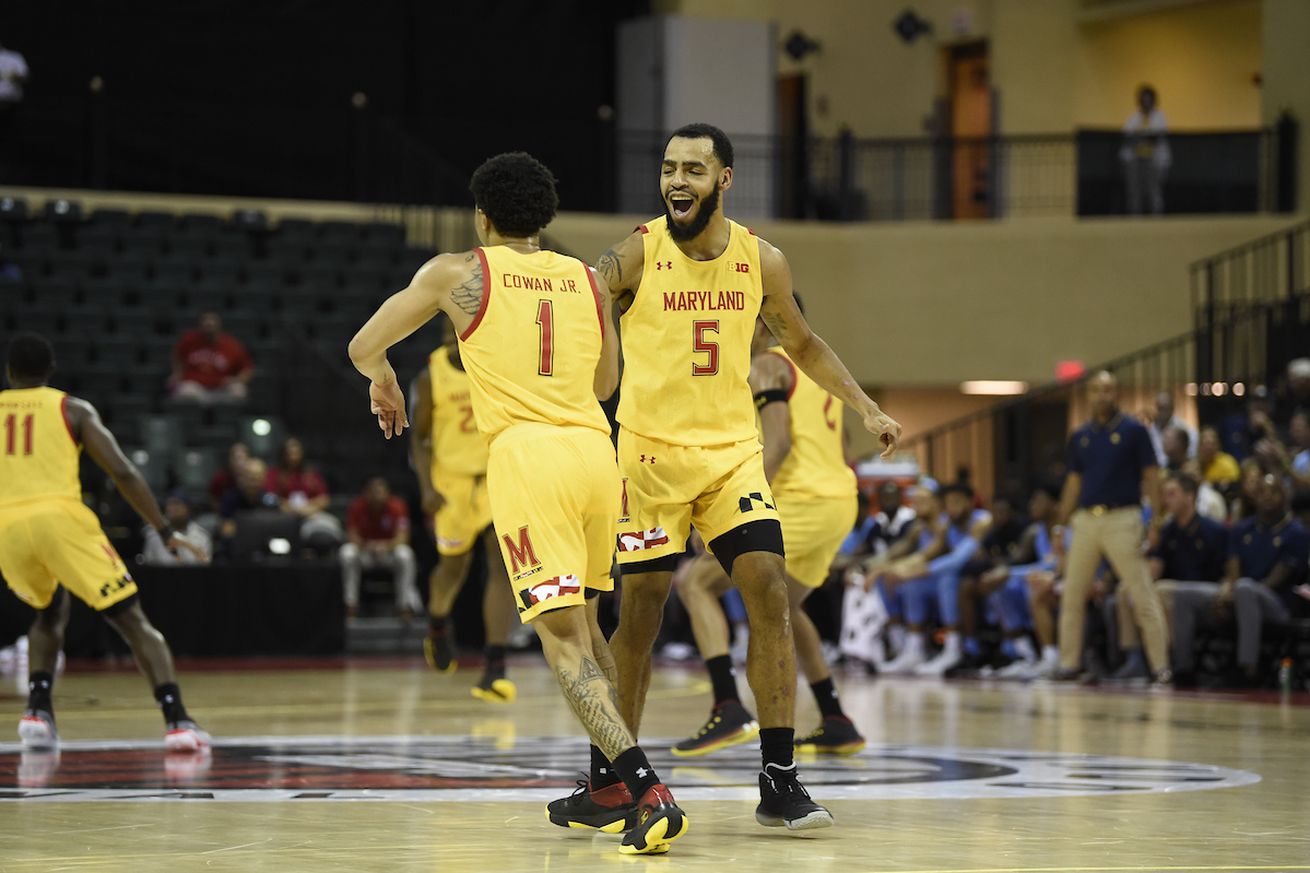 The Terps finally put together a strong first half against the Golden Eagles in the tournament championship.

ORLANDO, Fla. — After slow starts in each of its games so far this season, it was clear something needed to change for No. 5 Maryland men’s basketball facing its best opponent of the season, Marquette.

‘Does a team that starts so slow deserve a No. 5 ranking?’ fans and the nation wondered simultaneously. ‘Will the Terps be able to make a second-half comeback against a team boasting Markus Howard?’

But Maryland let any doubts fly out the window Sunday. After going down 7-0 early to Harvard on Friday — and 13-5 to Temple the game before that — head coach Mark Turgeon opted to switch his starting lineup against Marquette, going with a small-ball group with Eric Ayala replacing Makhi Mitchell.

The coaching change paid dividends, with the Terps off to one of their best starts of the year, going back and forth with the Golden Eagles before going on a 33-12 run for the final 13 minutes of the half en route to an 84-63 win to claim the Orlando Invitational championship.

“We were able to get stops early and that really allowed us to run a little bit,” tournament MVP Anthony Cowan Jr. said. “And then that really carried us through the whole game. We started getting consecutive stops, we saw the ball go in the basket a little bit and that really jump-started us.”

With the victory, Maryland starts 8-0 for the first time since 2006-07 — five years before Turgeon took over the helm.

The big question for Maryland heading into the championship matchup was how it would limit the nation’s most prolific scorer in Howard. The senior guard had broken the tournament scoring record, putting up 91 points in two games prior, but he was rendered useless on Sunday. He had just two points on 1-for-6 shooting at halftime before finishing the night with a measly six points.

“I knew what he was capable of coming into the game with his other two outings in this tournament, but I just tried to make it tough for him, contest every shot. Just try to use my size, try to use my length and just get physical with him,” said Darryl Morsell, who was the primary defender on Howard. “But it was a complete team effort…we were switching screens. … Everybody was locked in, dialed in to the game plan.”

But defense wasn’t the Terps’ biggest problem in their last two outings, it was the offense and flurry of turnovers and selfish play that buried them in holes early. That changed with the tournament championship on the line, diffusing chatter that the team didn’t live up to the number next to its name.

“I told them after the game I said, ‘Guys, I wasn’t very happy with five minutes to go in the first half versus Harvard. And for the next 65 minutes [of the tournament], I couldn’t have been more happy with our offense,” Turgeon said. “Our number one thing is to be selfless, and you can talk it, but you gotta live it. And I thought the last 65 minutes down here we lived it.”

With under 11 minutes left in the first, Maryland passed the ball around the exterior a few times before Ayala found an open look he liked. With two Marquette defenders trying to close in on him at the right top of the key, the sophomore guard threw a lob to Donta Scott, who drained a three-pointer from the opposite corner to extend the Terps’ lead to 18-11 in the midst of a 14-2 run.

Maryland then went on another big scoring spurt, ending the half on a 9-1 run to head into the locker room with a 21-point lead — its largest advantage at the break so far this season.

The Terps didn’t let up to start the second half, further extending its lead. Aaron Wiggins missed a three-pointer on the first play, but Jalen Smith grabbed the offensive rebound to keep the possession alive. Wiggins got the ball at the top of the key and hesitated as considered another deep shot before driving into the paint and throwing down a big slam dunk.

Marquette started to get back in its groove for a short period, going on an 13-2 run starting in the fourth minute of the half to shorten the lead to 13. But Maryland didn’t let it last for long, then going on a 9-0 run laced with three-pointers from Cowan and Wiggins to put the Golden Eagles hopes to rest.

“I’ve been waiting for that,” Turgeon said as soon as he faced media after the win, then noting that it was his team’s most complete performance yet.

1. Jalen Smith was a dominant presence down low. The sophomore big man had three blocks in the first half alone, never letting the opponent get an easy bucket. Though it wasn’t his best offensive showing — he had eight points — he finished with the three blocks, as well as six rebounds, three of which were on the offensive glass.

“Stix set a tone defensively. He was a huge presence inside the paint, just contesting and altering shots,” Morsell said. “I feel like he competed today, he held his own. So it was good to see him have success early on and I think that got us as a team going and him going as well.”

2. Maryland forced mistakes and took advantage. The Terps’ defense forced the Golden Eagles into 16 turnovers, and then made the most of each takeaway. Maryland finished the afternoon with 28 points off its foe’s mistakes.

In one instance in the second half, Cowan poked the ball out of the hands of Howard from behind and took off towards the other end. Ayala grabbed the loose ball and fired it across the court to his teammate. The senior nearly went up for the layup, but the made the smart choice to pass it back to Donta Scott, who leapt into a big slam.

3. Anthony Cowan Jr. had another impressive performance. After putting up 50 points in his first two outings against Temple and Harvard, Cowan appeared determined to lead his team to the Orlando Invitational championship.