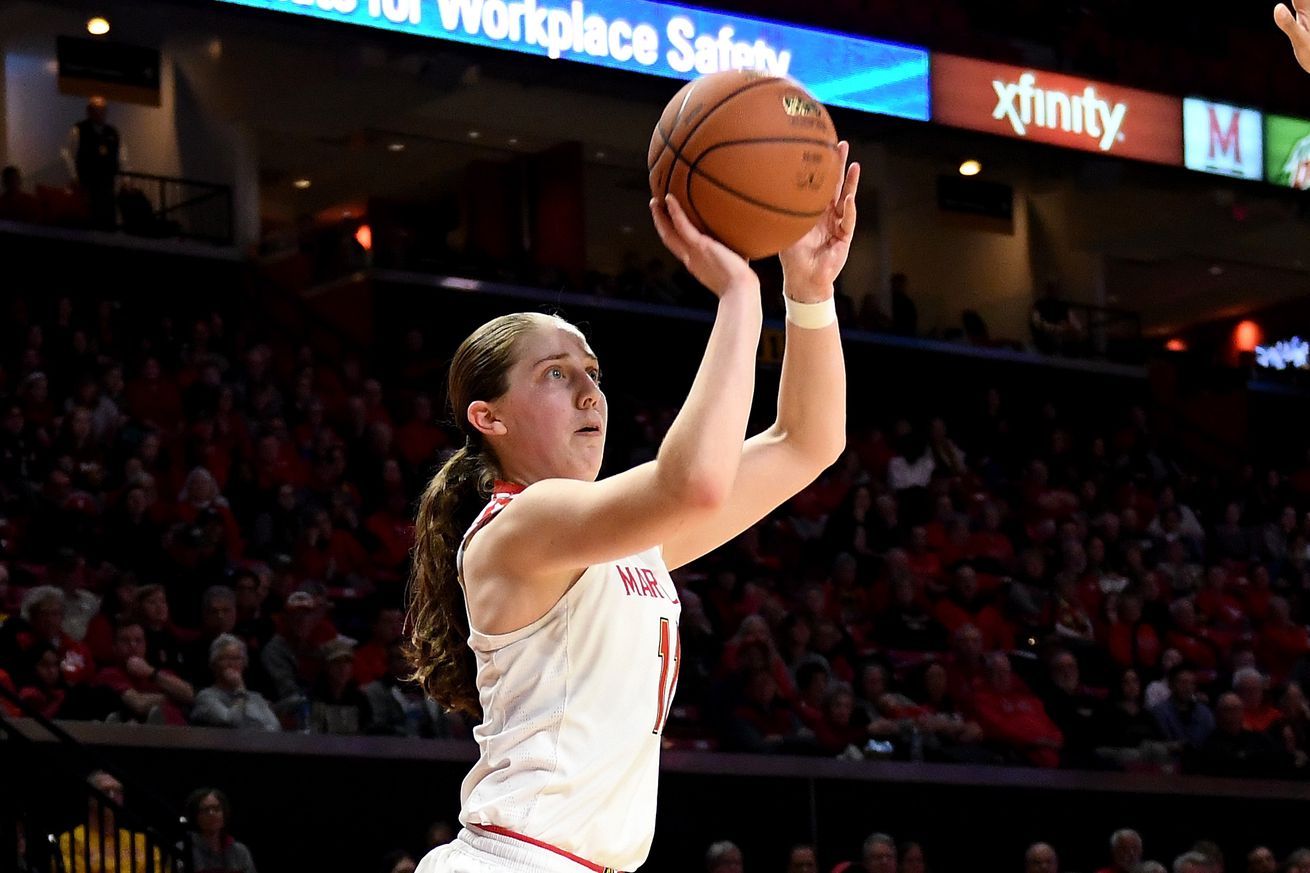 The Wolfpack got the best of the Terps in the Big Ten/ACC Challenge.

Following her second scoreless performance of the season, sophomore guard Taylor Mikesell took to the floor in Raleigh, North Carolina, looking to get back on track.

Mikesell had only hit one of her last eight attempts from deep, but in the first 10 seconds of the game, she stepped into a three-pointer, set her feet and sunk it to put No. 9 Maryland women’s basketball ahead to start. Just over a minute later, Mikesell connected on another three from the other side of the floor.

The Terp attack was hot from the perimeter all night long against NC State in the Big Ten/ACC Challenge, but couldn’t find their rhythm from the rest of the floor in the 66-59 loss. Maryland shot 47 percent from deep in the contest, but only connected on 34 percent (22-for-65) of its total field goals in its second defeat at the hands of a ranked opponent this season.

“It felt like a game that was built for March,” head coach Brenda Frese said. “When you talk about the intensity of that game, how it was back and forth … I thought [NC State] did a tremendous job.”

Maryland shot 4-for-9 from three in the first quarter, connecting on four of its first five shots from deep. A pair of early triples from Mikesell, as well as deep scores from seniors Blair Watson and Stephanie Jones, helped make the difference. The Terps finished 7-for-14 from deep in the first half, one of their best starts to a game shooting this season.

“Blair and Taylor were great,” Frese said. “I thought they really helped us with the threes that we really needed in this game.”

Maryland’s hot-shooting from outside early on put it ahead for a better part of the first half, though a late 8-0 run from the Wolfpack drew them within two going into the half, trailing 30-28.

But NC State didn’t allow the Terps to continue their three-point barrage into the second half, hedging on every pick-and-pop opportunity in an effort to limit Maryland’s opportunities from outside.

“They made some really strong adjustments,” Frese said. “When you talk about that looked like, we struggled some when we had to move Taylor to the point [guard position] … that impacts us when Taylor has to do so much, I thought she was flawless taking care of the ball and running the team but that impacted us.”

Mikesell stayed in a rhythm despite seeing less looks from deep, connecting on a three-point attempt from the right wing off an NC State turnover at the 3:24 mark to cut the deficit to three.

Maryland’s leading scorer Ashley Owusu struggled to find a rhythm for most of the evening, committing a career-high seven turnovers on the night while entering the fourth quarter scoreless. She came up big when the team needed her most though, notching her first two baskets early in the fourth to shorten NC State’s lead to down to three.

The Terps continued to chip away at the lead in the fourth quarter, as Mikesell sank a long-two with 7:44 remaining to reach 13 points on the night while keeping Maryland in it.

But NC State pulled away down the stretch, as eight points fourth quarter points from junior guard Kai Crutchfield fueled a late run for the Wolfpack. Ending the game on a 11-7 run, NC State cruised to the finish line despite Maryland staying in it for most of the contest.

“She was really the x-factor,” Frese said of Crutchfield’s play. “She was tough, I mean on both ends of the floor, defensively, offensively. It was impressive to watch but not fun to see, but she’s talented.”

1. Maryland’s defense passed the test early, but struggled late. Much was made coming in how Maryland’s aggressive defensive approach would hold up against a top-tier team. But the Terps pressure caused NC State to crack just as it has their previous opponents, forcing the Wolfpack to surpass their average amount of turnovers for a game in just the first half of action.

“I think that’s been the identity we’re trying to adopt, on the defensive end just trying to force as many turnovers as we can,” Mikesell said. “[Making] the other team uncomfortable, and just being more aggressive off of those turnovers would be the biggest thing right now.”

2. Maryland was dominated on the boards. The Terps have struggled to keep even in the rebounding battle in almost every game this season, but they were totally overmatched by the Wolfpack on Thursday night. NC State outrebounded Maryland 51-27 for the game, doing so off the back of 19 offensive rebounds. The Pack tallied 16 second chance points as well, with their advantage on the glass playing an important role in this one.

3. The Terps struggled to keep their composure in a big game. After having each of its last five wins come by at least 19 points or more, Maryland showed that it still has work to do against the best Division I has to offer. After keeping pace in the first half, NC State raised its level of play on both ends of the floor to put itself ahead for most of the final 20 minutes of play and proved that it was the more experienced team on the floor Thursday.

“We have a lot of things to learn from, and I think we’re gonna get better in practice,” Watson said.