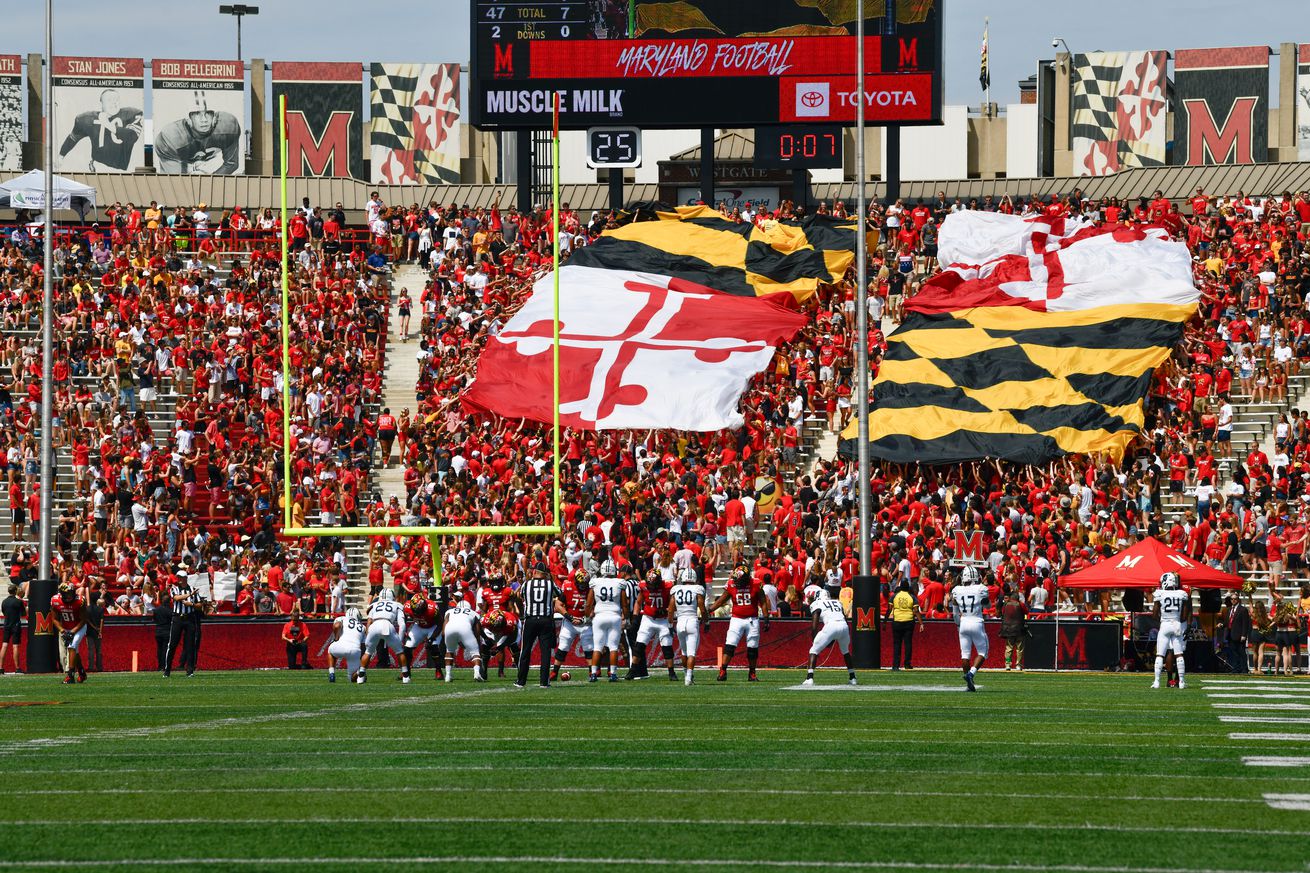 We’re giving out awards — some good, some bad — for the Terps in Mike Locksley’s first year as head coach.

In the first year of the Mike Locksley era, Maryland football finished an underwhelming 3-9 with victories over Howard, then-No. 21 Syracuse and Rutgers.

The team completed 2019 on a seven-game losing streak.

Although it was a rough year for the Terps, the Testudo Times editors decided to hand out some superlatives — some good and some bad. Here are Cody, Lila and Sean’s picks.

We’re going to have to go with N/A on this one, as once again the Maryland quarterback room was full of constant rotation and disappointment.

Josh Jackson was expected to be the guy under head coach Mike Locksley, but that quickly faded. While some quarterbacks maintained the ability to run the ball and others possessed the skill to throw down the field, none of the team’s signal callers could put together the full package or step up as a true leader.

Jackson technically qualifies as the top choice, but his first season in College Park was not a pretty one. The Virginia Tech transfer threw for 1,274 yards, 12 touchdowns and six interceptions. Jackson saw the majority of the snaps for the Terps but was very streaky in his play, appearing comfortable and in-rhythm on some drives and uneasy on others.

But when Jackson went down with a mid-foot, high-ankle sprain against Rutgers, backup quarterback Tyrrell Pigrome replaced him as the starting quarterback for three games. Pigrome did not look much better and struggled to throw the ball down the field.

Tyler DeSue and Lance LeGendre saw limited game action behind Jackson and Pigrome. DeSue entered the game against then-No. 17 Minnesota and threw for 88 yards and a touchdown on a 59-yard pass. LeGendre played more towards the end of the season, appearing in games against then-No. 14 Michigan and Nebraska before dislocating his shoulder. He rushed for 104 yards on 13 attempts and only completed one pass for seven yards.

Anthony McFarland Jr. battled an ankle injury throughout the year, and that’s not even the worst thing to happen to the running backs room. Jake Funk and Lorenzo Harrison III were lost for the season with knee injuries early on, while Tayon Fleet-Davis was charged with a DUI later in the year.

That meant Leake — who was expected to be a part of a relative running-back-by committee — had to be the main rusher at many times throughout the season. And fortunately for him and the Terps, he filled the role better than anyone could have expected.

On the year, he finished with 791 yards from scrimmage on just 111 touches, averaging 7.1 yards a pop. That included a team-high 736 rushing yards — 122 more than McFarland, even on 12 fewer carries — and eight touchdowns, which tied for the lead.

And while this is a section for top offensive player, we’d be remiss not to mention Leake’s special teams play. He was a revelation running kicks for the Terps, averaging a healthy 26.8 yards per return while scoring two touchdowns, all of which earned him the Big Ten Special Teams Player of the Year.

On a unit that finished worst in the Big Ten in total defense and second-worst in scoring defense, Antoine Brooks Jr. was one of the few bright spots. He made the transition from nickel corner to box safety with ease, and he provided the senior presence in the secondary that Maryland needed — even if the rest of the team didn’t live up to the task.

Brooks didn’t make quite the same impact Darnell Savage Jr. did in his final year in College Park, but he still finished with 87 tackles (69 solo, which led the Big Ten), 8.5 tackles for loss, five pass breakups, a fumble recovery and an interception. There wasn’t many positives to take away from the defense’s performance this year, but Brooks was certainly one of them.

Breakout player of the year

This one goes to sophomore Ayinde Eley. During the 2019 spring game, Eley was the hardest hitter on the field. From that point on, we knew Eley would be a factor for the Terps when the regular season arrived.

After appearing in 12 games and only making one start last year, he made much more of an impact this season, recording the second-most tackles on the team (79). He also had four tackles for loss, two fumble recoveries and an interception. With so many injuries suffered by Maryland players, Eley was a steady component on special teams and in a deep linebacker corps.

It should be interesting to see how he builds off this season in year No. 2 of the Locksley era.

Newcomer of the year

A lot of eyebrows raised when it was discovered that Locksley was bringing in Ohio State transfer Keandre Jones and Clemson transfer Shaq Smith. The duo was expected to be a tough test for any opponent, but Jones ultimately ended up having a much better year.

The former Buckeye led the team with seven sacks for a total loss of 52 yards and finished third in total tackles (74). He made an instant impact since he stepped on the field in College Park and became a vocal leader that the Terps began to trust throughout the season.

Jones’ teammates raved about the experience he brought from Ohio State and his ability to get his teammates fired up. He was always the guy who called extra meetings and was even voted as the team’s motivational speaker. In only one season with the program, Jones clearly made an impact on his teammates and his coaches.

After flipping his commitment from Florida State to Maryland, Nick Cross officially became the highest rated recruit to come to College Park since Damian Prince in 2014.

As one of five defensive backs that arrived to campus this fall, Cross was expected to see the most playing time. The DeMatha product played in 12 games, extinguishing the possibility of a redshirt this year, and he had 45 tackles to go along with two interceptions.

In his first season as a Terp, Cross received a lot of experience against top teams. After almost every practice, Cross could be seen working with defensive coordinator Jon Hoke on his coverage skills. He made great strides this year but also solidified a starting spot in Maryland’s secondary next season.

Player that will be missed most

Maryland will be without its two top running backs — McFarland and Leake — next season. On Dec. 3, McFarland announced he was entering the 2020 NFL Draft, and Leake did the same thing one day later.

After tallying 1,034 yards and four touchdowns last year, McFarland struggled in 2019 as he nursed an ankle injury, producing 614 rushing yards and eight touchdowns. Due to his injury issues, Leake was asked to step up and received more carries.

Leake had the best season of career with 736 rushing yards and eight rushing touchdowns to go along with two kick return touchdowns.

The Terps will be without their two best playmakers next season as the duo pursues their NFL dreams, which could cause some struggles in the rushing attack.

Best moment of the season

This one is pretty easy — Syracuse, and it all went downhill from there. We admit, we were a little fooled by this game, and we’re sure you might have been too. The Orange came into the Sept. contest ranked No. 21 in the nation, so when the Terps took a dominant 63-20 victory, a lot of false hope was spread.

Even though Syracuse proved not worthy of that ranking — and Maryland certainly showed it wasn’t worthy of its No. 21 ranking following — to get that kind of win over any team, while putting up 142 points in two contests to start the season, seemed like a good sign.

Worst moment of the season

While Maryland had already been eliminated from bowl contention after five straight losses entering the Nov. 23 matchup against Nebraska, it still had something to play for. The Terps were competing in their final home game of the season, which meant it was Senior Day for the team’s 16 players leaving the program — and ultimately many more, with the early decisions of McFarland and Leake to enter the 2020 NFL Draft and numerous others transferring out.

Instead, Maryland gave its home fans a farewell consisting of a 54-7 beatdown by the Cornhuskers. Nebraska took a 7-0 lead just over three minutes in and never looked back, winning 34-0 at the break and relentlessly dominating all night. It wasn’t until a Leake run with three minutes left in the game that the Terps finally scored.

Josh Jackson led all Power Five freshmen in passing yards (2,991) and completions (236), as well as ranking second with 20 touchdowns at Virginia Tech, and he was regarded as a major pickup for Locksley. Fans and analysts alike remarked that he was the best quarterback talent Maryland had seen in years and were hopeful he could bring some stability to the position.

But alas, the transfer just wasn’t the same player back on the field after fracturing his fibula in 2018. The Terps’ offensive line didn’t provide much help, but 1,221 total yards (122.1 per game), 12 touchdowns and six interceptions on a 47.3 completion percentage is a pretty abysmal stat line.

Injury that hurt the team the most

Jeshaun Jones had quite the impressive freshman season in 2018. Despite only starting in two games, he recorded the most receiving touchdowns as a Maryland freshman (5) since Stefon Diggs, and he was also the first Big Ten rookie to have two games with a touchdown run and catch since 2003.

Jones was the unanimous pick to be the Terps’ No. 1 wide receiver for this season, but he never got to play a single snap after tearing his ACL in fall camp. As shown above, Maryland clearly struggled in the passing game, and not having a go-to receiver certainly played a part.