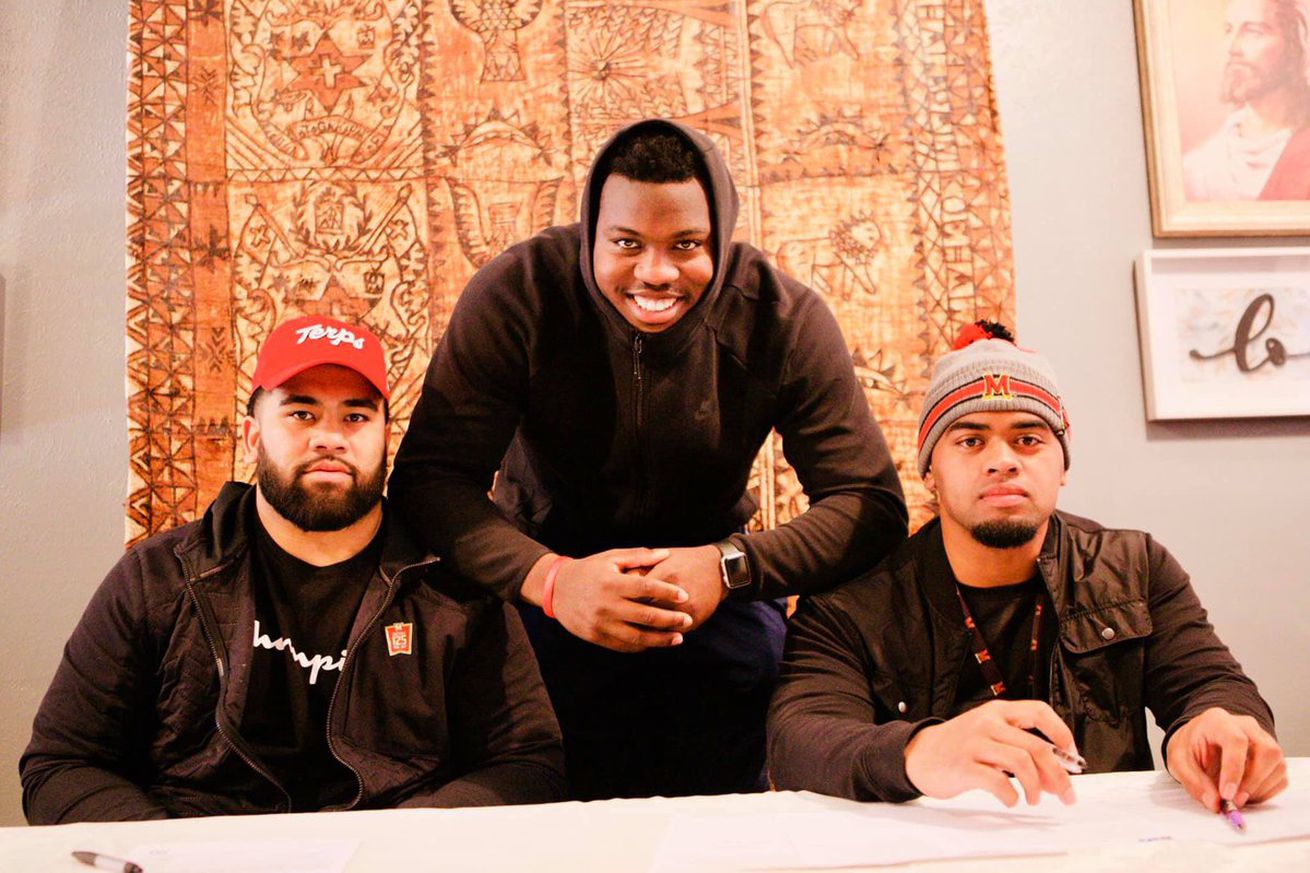 The Terps signed the majority of their 2020 class on Wednesday.

Despite a 3-9 campaign in 2019, head coach Mike Locksley and his staff managed to make a ton of noise during the early signing period as they work towards building the program they’ve envisioned.

Mostly thanks to the stunning flip of five-star wide receiver Rakim Jarrett, the Terps’ 2020 class jumped up to the No. 27 rank in the nation and No. 6 in the Big Ten, according to 247Sports.

In total, 23 of the 27 committed players signed and delivered their National Letter of Intent to Maryland — meaning that the majority of the staff’s work for this class is done.

Here is a look at some of the key points from the early signing period.

1. The focus may be local, but the staff continues to go national

There is no doubting the amount of football talent that comes from the DMV area — or the fact that Maryland should focus in on its home turf — but Locksley and his staff showed with this class that they can use a national recruiting plan to bring talent to College Park.

“Anyone that knows me knows that if we’re going to recruit here at the University of Maryland, it will start right here in the DMV, and that will change,” Locksley said on Dec. 18. “But what we’ve shown is that we have the ability to recruit nationally and go wherever we need to go to get players to help us make this program great.”

Maryland was able to reach into the heart of Big Ten country and sign running back Peny Boone from Detroit, Michigan, get out to the West Coast and build a connection with cornerback Devyn King in California and even snag a signature from Oklahoma running back Isaiah Jacobs.

In addition to the three players from Maryland, the Terps added seven signatures from Florida natives, two from New Jersey locals and two from Texas recruits. Overall, the team has commitments from 13 different states, though the four signatures it is still waiting on could expand that even more.

2. Florida was a particular area of success

“I’ve recruited Florida for about as long as I’ve recruited the DMV,” Locksley said. “We’ve got coaches on our staff that have some familiar ties down there. I thought our staff as a group did a tremendous job, whether it was co-recruiting with the position coach and a recruiting coach, of trying to meet the needs.”

On top of Locksley’s personal success as a recruiter in the south, two key difference makers on the staff were outside linebackers coach Brian Williams — who hails from south Florida — and tight ends coach Mike Miller — who is a Palm Beach area native.

The abundance of talent in the state of Florida is seemingly endless, and with enough scouting and recruiting, there is a good chance of finding some great players that could be vastly overlooked on a national scale.

The offensive and defensive lines were among some of the most important positions for Maryland to rebuild at, and the junior college route seemed to be the most efficient way to do so.

“When you sign high school guys, especially on the O-line, it takes a little more time,” Locksley said. “That’s why you see us with a few more junior college prospects on both sides of the line. These are guys that we’re bringing in to have the opportunity to compete.”

In all, Maryland welcomed in five junior college players — including a quartet from Independence Community College, which was featured in the Netflix series Last Chance U.

Three of those five junior college players come in on the offensive or defensive lines — potentially offering immediate remedies next fall for the Terps.

“I think the biggest factor for us will be the fact that I think eight of the signees will be mid-year enrollees,” Locksley added. “That’s the part that I’m really excited about, because these guys will be here for spring practice, for our winter workouts, and for all the culture building things that we need. And that, more than anything, helps in the development of players.”

There will be a blend of prospects from high school and from junior colleges enrolling at Maryland in January as they hope to get up to speed before their first seasons in College Park.

Locksley and his staff must utilize this time to finalize the program’s foundation and make sure there is a stable of players at each position to withstand an entire season — which proved difficult in 2019.