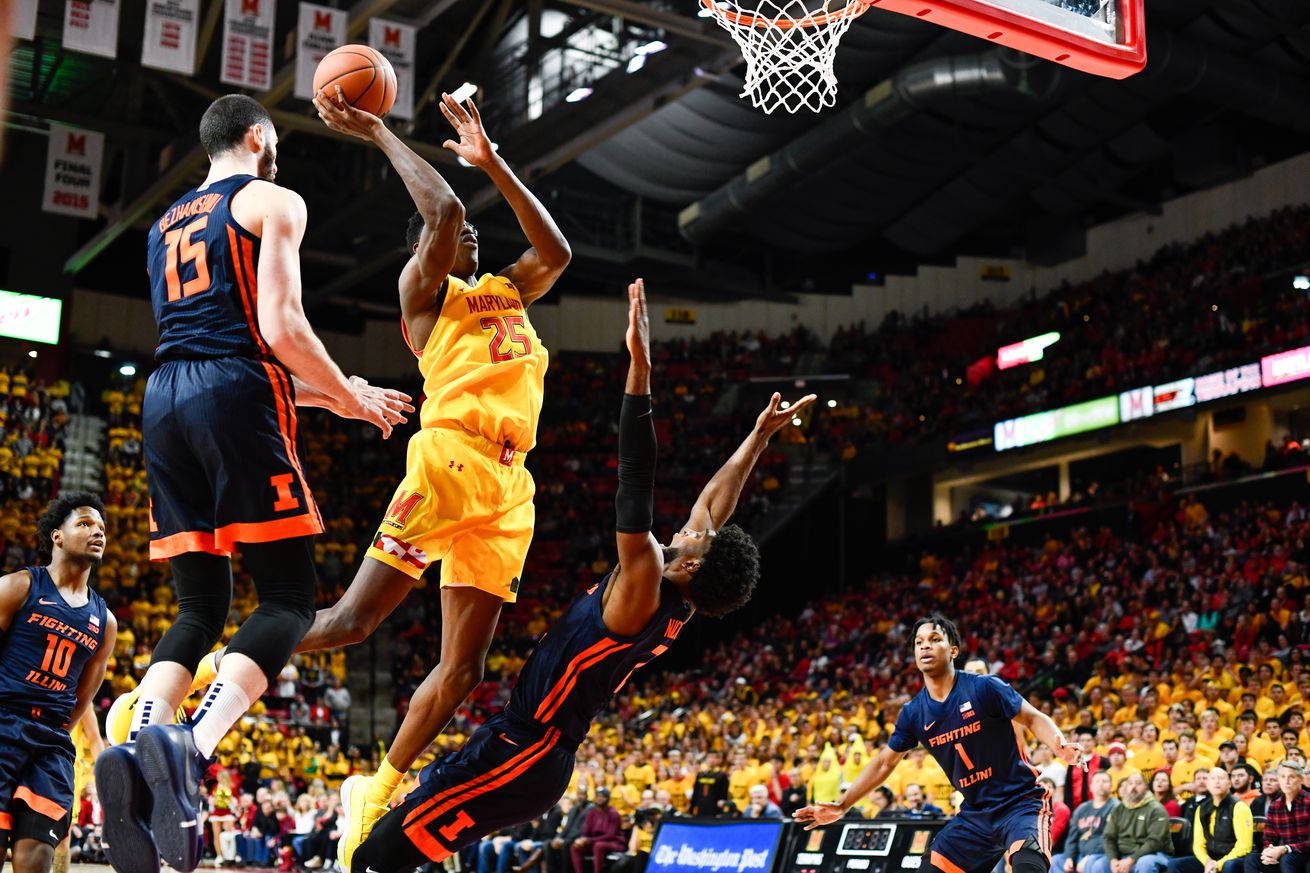 The Terps overcame a poor shooting night to overcome their first potential upset of the season. Here’s what we took away.

No. 3 Maryland men’s basketball is still undefeated on the 2019-20 season, though getting there wasn’t exactly easy.

The Terps barely escaped with a 59-58 win over Illinois on Saturday, needing Anthony Cowan Jr.’s heroics to pull off the comeback victory. Other than the senior’s spectacular performance, here were a few things that stood out.

1. Jalen Smith is putting it all together

Through five and a half games, Smith couldn’t buy a basket from beyond the arc. He had missed his first 11 attempts and was looking less and less like the deep threat he resembled at the end of last season.

But ever since the second half against Temple in the Orlando Invitational, Smith has been terrific in stretching the floor for the Terps. He’s made six of his last 14 three-point attempts, good for a would-be team-high 42.9 percent.

Against Illinois, the defense was essentially giving Smith wide-open looks. And he made them pay, going 2-of-5 from long range, including the second-biggest shot of Maryland’s comeback.

.@JalenSmith2000 with a HUGE three-pointer here to make it a 4-point game. He is 2-of-5 from beyond the arc today. pic.twitter.com/EsmTRlPIX1

And while the sophomore is improving in his three-point shooting, he hasn’t sacrificed in the rest of his game.

He made half his six field goals from inside — and both of his free throws — while adding 13 rebounds, good for yet another double-double. That included six offensive boards, adding to the Terps’ 13 second-chance points on the afternoon.

As a freshman, Smith had five double-doubles all season long. Through 10 games in the 2019-20 campaign, he already has six — three in his last four games alone. He also added three blocks, giving him 11 in his last three outings and raising his season average to 2.4 per appearance.

“He blocked three shots and intimidated probably another seven or eight,” head coach Mark Turgeon said. “He’s had 29 points and 29 rebounds in the last two games or something crazy like that. He’s playing terrific for us and I’m just glad we got him.”

And given that only Bruno Fernando is gone among regulars, that wasn’t expected to change much, especially not in the numbers from beyond the arc. Aaron Wiggins (41.3 percent from three in 2018-19) and Eric Ayala (40.6) were back and expected to make leaps in their sophomore seasons along with the rest of the team.

But against Illinois, Maryland’s shooting woes continued. It shot just 33.3 percent from the floor and 25.8 percent from three, both of which were season-lows. The Fighting Illini weren’t much better, which was the only reason the Terps had the chance to pull off the comeback.

“We were really selfish, again. Over dribbling, taking some bad shots, trying to play hero ball, trying to be the guy who gets us going instead of just [passing],” Turgeon said. “We got a long ways to go offensively.”

Wiggins and Ayala especially struggled, combining for a 3-of-13 showing from beyond the arc and a 5-of-21 shooting performance overall. On the year, the duo are making just 28.4 percent of their triples, which has often been the difference-maker in terms of Maryland not being able to blow teams out.

The team as a whole is shooting just 30.4 percent from beyond the arc, second-worst in the conference only to Rutgers. The Terps’ 43.8 field goal percentage as a whole ranks 10th.

It’s hard to imagine Maryland continues to shoot this poorly as the season rolls around. But the year progressing also comes with an increased level of competition and the stout defenses of the Big Ten could be a huge challenge for an already struggling team.

Scott’s most-remembered contribution from Saturday’s game will likely be his handing the ball off to Anthony Cowan Jr. before the game-tying three, but the freshman made a big impact in the Terps’ win over Illinois.

His final line wasn’t necessarily eye-opening — Scott finished with two points and four rebounds. However, his high level of play can be discovered in Illinois’ box score.

Giorgi Bezhanishvili and Kofi Cockburn — who combined to average 16.3 and 10.3 points, respectively, entering the weekend — were held to 15 total points and each committed four fouls. Darryl Morsell, arguably Maryland’s best defender, started the game and struggled on that end of the court.

That led Turgeon to put in Scott, who despite his relative inexperience, has brought a toughness to the team that was lacking last season. And once again, he impressed beyond expectations.

“We all have a ton of confidence in Donta. Kid plays so hard. He’s physical, did a nice job on double teams late in the game,” Turgeon said. “Darryl’s been able to guard everybody — one through five — he wasn’t as successful with that.”

Scott ended up starting the second half and played the final 4:33 of the game over Morsell, finishing with a season-high 27 minutes.

“Once [Turgeon] put me out there, I knew it was a test and I had to step up to get the job done” Scott said. “I had to go out there and push through all my pains and adversity and just keep playing.”

He was the only bench player to have double-digit minutes, and he’s proving himself to be an extremely important member of the rotation.