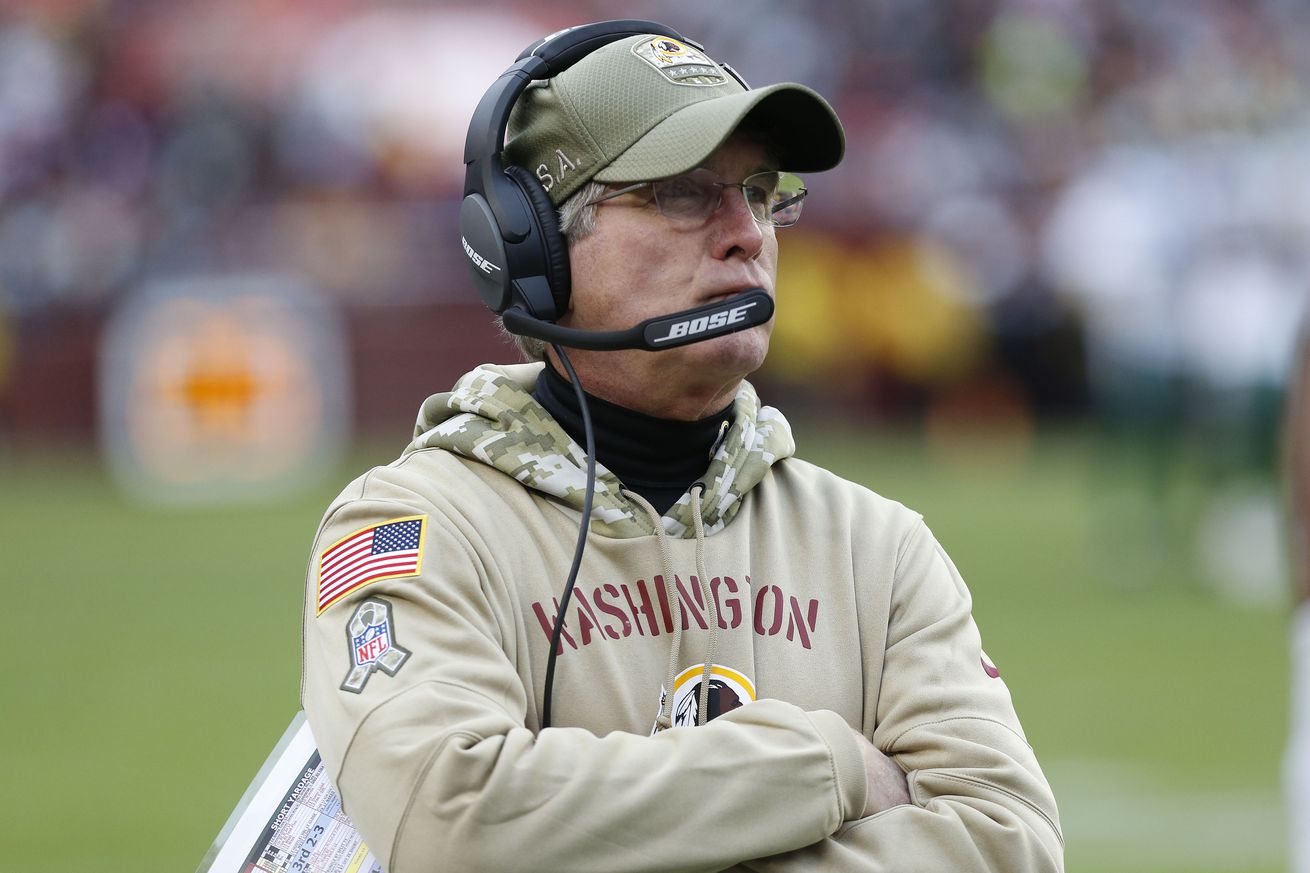 Redskins interim Head Coach Bill Callahan and starting QB Dwayne Haskins Jr. stepped up to the podium today. Callahan gave some injury updates, including Ryan Kerrigan being in the concussion protocol. He has never missed a game since entering the league in 2011, and that streak could be in jeopardy this week. Haskins said his wrist injury shouldn’t affect him this week vs the Panthers.

Bill Callahan at the podium – Says Josh Norman is not a starter this week but he will play in Carolina.

Callahan speaks on what Ryan Kerrigan means to the team. “He relentless regarding his training, his regiment. I have the upmost respect for what he means to this team.” #Redskins #HTTR

Callahan continues to make changes to practice. Today there were less reps in order to get on and off the field quicker. The interim head coach said Wednesday’s practice was a good start to the week of preparation against the Panthers. #Redskins #HTTR

Callahan says as they get later in the year they streamline things with practice reps to try and stay fresh. Some of the base runs/passes don’t need as much work, so they spend time on the new stuff and keep the fundamentals where they have been since he took over.

Callahan said Fabian Moreau has the skillset to play in man coverage and challenge people on the line of scrimmage. Moreau had two interceptions in the #Redskins win over the #Lions #HTTR

Callahan said He thinks Fabian Moreau is probably best suited to play outside. Likes his skill set outside, ability to challenge more. Different deal inside. Feels having Moreland inside gives the D a different look.

Callahan asked about Julia Crabbe’s family demonstrating at #Redskins Park. He offers condolences for what they are experiencing, as he has before. pic.twitter.com/Mv6KdbIT2z

The #Panthers defense presents a big challenge to the #Redskins offense, Callahan said.

Skins analytics question was about in-game – clock management and 4th down decisions. There are 2 guys on front office staff with analytic functions

A few questions about analytics during Callahan’s presser today. Callahan said they’ve definitely looked into some numbers, but they don’t have an analytics department. #Redskins #HTTR

Callahan says there’s a ton of value to getting information on situational football discussions (i.e. 4th downs) but at the end of the day there’s still a gut instinct decision to be made. The more you do it and the more data you have, the better you’ll be at making those.

Dwayne Haskins at the podium now – says of the selfie “it was an honest mistake. It will never happen again.”

Haskins says the wrist is fine now and that it impacted his grip against the Lions. “I just missed” on some of the throws vs Detroit

Haskins says some of the inaccuracy Sunday was definitely the wrist because he wasn’t gripping the ball like he normally did. Said it’s fine and it won’t affect him against Carolina.

Haskins said the offense played aggressive against the Lions and the game plan is to work off the ground and pound and play off of that. #Redskins #HTTR

Dwayne Haskins to the podium.

Says there’s improvement for everything and confidence will improve week-by-week in taking shots down the field. Said the team will stick to it’s “ground-and-pound” mentality and he’s excited for the game plan against Carolina.

Haskins said “breakout games” usually just happen, and that will come as he progresses in the offense. #Redskins #HTTR

Haskins just busted out a Spider-Man reference when talking about his criticisms. “With great power comes great responsibility.” Seems accurate for his position. #HTTR #Redskins

Haskins also talked about Sean Taylor with it being the anniversary of his death. Said he’ll always remember that day when heard the news that Taylor had died. #Redskins #HTTR

Dwayne Haskins remembers where he was when Sean Taylor died. “He played every play like it was his last. That’s something I will always admire.”

On Thanksgiving- Haskins says how thankful he is to have the opportunity to play in the NFL and for the Redskins. “Mac and cheese is something I have to have.”

Haskins will have his family seeing his house for the first time on Thanksgiving Day. Said his sisters are vegan, but he always has mac and cheese and black forest ham on his table. #Redskins #HTTR

Asked about Bill Callahan getting into players and challenging them, Haskins said it sounded familiar after being coached by Urban Meyer.