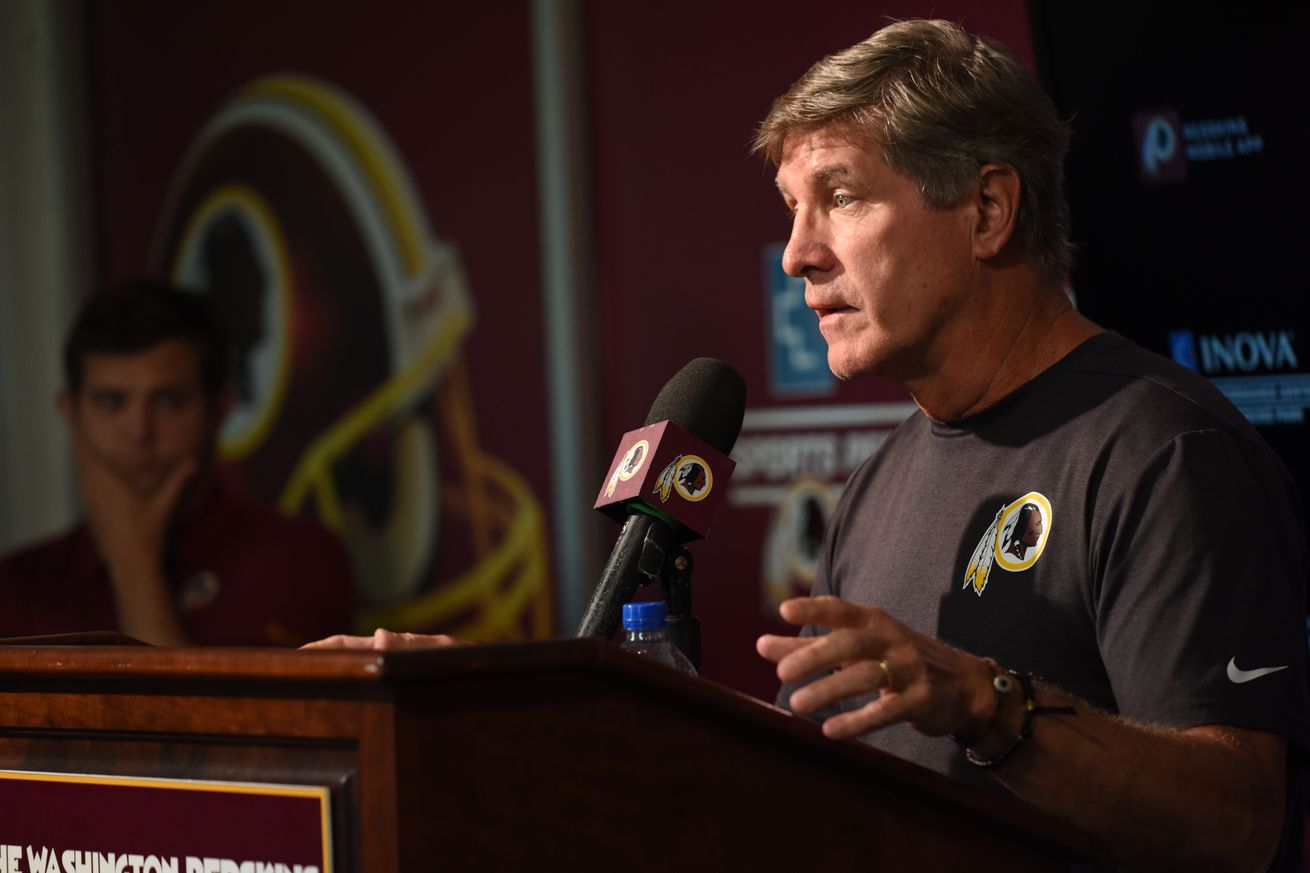 Redskins Head Coach Bill Callahan and Offensive Coordinator Kevin O’Connell spoke to the media after today’s practice. Ryan Kerrigan has been placed on injured reserve due to a significant calf injury. Callahan hopes it won’t require surgery. WRs Paul Richardson Jr. and Trey Quinn have both been ruled out for Sunday’s game against the Philadelphia Eagles. The Redskins will have another Mr. Irrelevant available this week, signing TE Caleb Wilson from the Arizona Cardinals practice squad.

Callahan announces Ryan Kerrigan is being placed on IR, ending his season. #redskins

Breaking: Ryan Kerrigan has been placed on IR, per interim head coach Bill Callahan. He was 1.5 sacks away from being the franchise sack leader. Now his season is done. #Redskins #HTTR

Callahan said the Redskins record had nothing to do with Kerrigan to the IR. it’s a serious injury.

Asked if Kerrigan would need any type of surgery, Callahan said “I hope not.” https://t.co/R4ZyanpDQf

Callahan also announced that wide receivers Paul Richardson and Trey Quinn will be out against the Eagles because of injuries.

“We worked him out. You know, we’re just getting him on the field, getting him moving. I thought the trainers did a really good job, he had pretty good movement skills through his drill work. We didn’t give him actual rep work, but he’ll be a game time decision for us.”

The Redskins signed TE Caleb Wilson off Arizona’s practice squad. He was Mr. Irrelevant in the 2019 draft.

With Kerrigan done for the year, Montez Sweat will have a much larger role in the final three weeks of the season. #Redskins #HTTR

“So, it really doesn’t matter one way or the other because he does flip sides, so he does play both right and left. It’s different if you were in the 4-3 and you were specifically just a left end or a right end per say, but in the 3-4 those guys have a lot of flexibility in terms of going from side to side. So, I think he’ll still see the same amount of reps, matchups and snaps from that specific side, if that makes sense.”

“I’ve watched Philadelphia’s young defensive end, 94 [Eagles DE Josh Sweat]. I think we’ve seen a lot of production and elevation and we’ve seen a lot of growth in his game. We’re working towards that with [LB] Montez [Sweat]. There’s flashes of that we see in his play. I think it’s just a matter of overall consistency down in and down out, being that factor to put the heat on the quarterback like we’re seeing from the young defensive end in Philadelphia. That’s just a growth process, especially being in the 3-4 where you not only have rush assignments, but you have coverage assignments as well. It’s different if you had your hand in the dirt every down and you’re triggered to go off the edge whereas he has multiple assignments, so I think that factors into his growth and also his maturation as well.”

Adrian Peterson is 282 yards away from another 1,000-yard season. O’Connell: He’s been huge for us for the last couple of years. #Redskins #HTTR

Kevin O’Connell to the podium.

He says AP is perhaps the most consistent guy in the entire building in terms of his habits and how he prepares. He’s not surprised they can still count on him through all the other injuries around him.

“Well, we’ve had some division games where there was maybe three or four weeks in between seeing them and still your original game is in the five-or-six-game breakdown that we normally do. This has obviously been 13 weeks and a lot of changes to both football teams, a lot of changes to how maybe we’re trying to attack them or how they’re trying to play defense. As far as Philadelphia goes, that defense is always a huge, huge challenge for us. They’re always going to play an attacking style. They’re a very, very special group of guys up front not only rushing the passer but stopping the run. They’re right up near the top of the league again this year stopping the run. Obviously, the linebacking corps and the secondary are making a lot of plays, always centered around [Eagles S] Malcolm Jenkins and his ability to impact the game in so many different spots. One of the things, we’ve played them, we haven’t had the success that we really want to have wins and losses wise, but there were some definite things that we did in that first game that we can take with us to Sunday. But at the same time, we’re a different team than we were then and so are they, so it’ll be about adjusting on the fly to obviously a plan we put together and then we’ve got to be able to make adjustments and attack and be ready to help our team win.”

O’Connell said we are starting to see the evolution of Steven Sims Jr. The offense is trying to get him more involved and he has certainly taken advantage of it with his route running and speed. #Redskins #HTTR

KOC says that he’s really seen a progression in Steven Sims’s ability to read the game. He really wants to try and get him the ball more as Sims proves he understand leverage, timing, etc.

“The play you’re speaking about with [TE Jeremy] Sprinkle was a very, very good play by him and it was just Sprinkle doing his job ‒ we call that a deep-sit route. It’s the element of for a young player, I’ve got to try to get open in the confines of doing my job for the play because all five eligible [players] normally work together. We have them at certain depths, inside release, outside release, understanding the quarterback progression for the quarterback is one thing, but how does my job as a route runner, at any of the positions, tie into what we’re trying to do from a completion and that was absolutely awesome. I’m glad you noticed that as far as where Jeremy was, how he inside released, pushed vertical, he really took two – we call it take two winning – is what he did. He’s actually open, as well, late as well as [WR] Terry [McLaurin] on the backside and guys are understanding how it all works together and you can sit up here and talk about Xs and Os all day and that’s what we really try to harp on these guys are the details that we’re just throwing it around the lot of young players.”

“First and foremost, as far as the health of any of our players on offense, which obviously I’m responsible for, that’s the trainers and medical staff and [Interim Head] Coach [Bill] [Callahan] ‒ I’ll always ask, ‘Hey are you good to go?’ We’ve had some circumstances, obviously [QB] Case [Keenum] against Minnesota in the first half, where I could kind of tell where that was going based on my initial conversations with him. With a twisted ankle, or whatever we’re calling it, it’s one of those things where it’s up to the medical team and Coach Callahan to figure out how far we can go with him in the game and [QB] Dwayne [Haskins Jr.] was not going to come out of that game, he wanted to stay in there, which I liked. Obviously, we don’t want to put him in a situation where he can get hurt even more or put himself in a situation maybe cause harm to the offense or himself moving forward. It didn’t seem to be that situation according to the doctors and what Dwayne was saying, so when we got him in there, especially that last two-minute drive, I was just happy with the way we went down the field. I think we went down the field in about a minute and 30 [seconds]. Dwayne, I think, threw 6-of-7 competitions, great decisions. We finally got into a rhythm there attacking that coverage and go down the field and he and [WR] Terry [McLaurin] make an unbelievable play down there in the low red zone. Not a lot of people have talked about this, but when we do have to go drop back to throw in those two-minute drives, I think back to Detroit, I think back to Green Bay, he’s had some great protection. We were doing some things to help those guys upfront on the edge and things like that, but the way he was able to sit back, stand tall in the pocket and really progress and attack coverage and then the details and the durability and endurance of those receivers. When you go two minute and you’re really not a tempo team, it really tests those guys to stay in there execute at a high level against a good defense. I thought that was a really, really good drive for our whole group.”

“That kind of tempo comes when you’re in a two-minute situation and you’re trying to score points in a hurry. Obviously, if you’re going to do that throughout different points in the game, you need to really evaluate hard how that affects all three phases. If you want to be a tempo team that also runs the football a lot, you’re going to really run into some situations where that defense better get a quick sip of Gatorade and get ready to go right back on the field if you’re not earning first downs. I was around one of the better tempo coaches to ever really do it, one of the originators as far as applying it to major college football and then the NFL. The first down was always a big thing, getting the drive going and allowing it to be something where the defense is now on their heels. It’s hard to just jump into it right on a first and ten because you really don’t know how the rest of the drive is really going to play out. You don’t know really why you’re jumping into tempo. Have a reason, have a plan, have a purpose, I think can be a great thing for a football team, especially when they’re mixed into how you want to attack on a regular down and distance.”

Why Haskins Jr. excels in the up-tempo offense:

“Does it remind you of anything when he’s standing in the shotgun, taking a drop and throwing the ball to [WR] Terry McLaurin? It probably reminds you a little bit of Ohio State and him in the spread and reading coverage. I think that there’s some carry-over there to what he did at a pretty high level in college. But the NFL is obviously a game where you’ve got to be really careful about just dropping your quarterback back 45 or 50 times. Five or six man protections may sound great in theory to get him in a rhythm and all those things, but then you have to start to go ask [G] Ereck Flowers [Sr.] and [C] Chase Roullier and [G] Brandon Scherff and [T] Donald Penn and [T] Morgan Moses about dropping back 45 or 50 times and they’re going to say, ‘We need to run the ball, we need to play pass, we need to throw screens.’ They know part of the issues there and we’re not playing seven-on-seven – obviously, we do that every day in practice and it’s fun to watch – but there is an element to football that’s not just pitching and catching out there on the grass. It’s a good question, we’ve talked about tempo a lot over the past six or seven months when I’ve talked to you guys. But when you get into a season and just how to win football games, the head coach determines how to win the football game and then Coach [Defensive Coordinator Greg] Manusky, [Special Teams Coordinator] Nate Kaczor and myself, it’s our job to make all three phases go.”