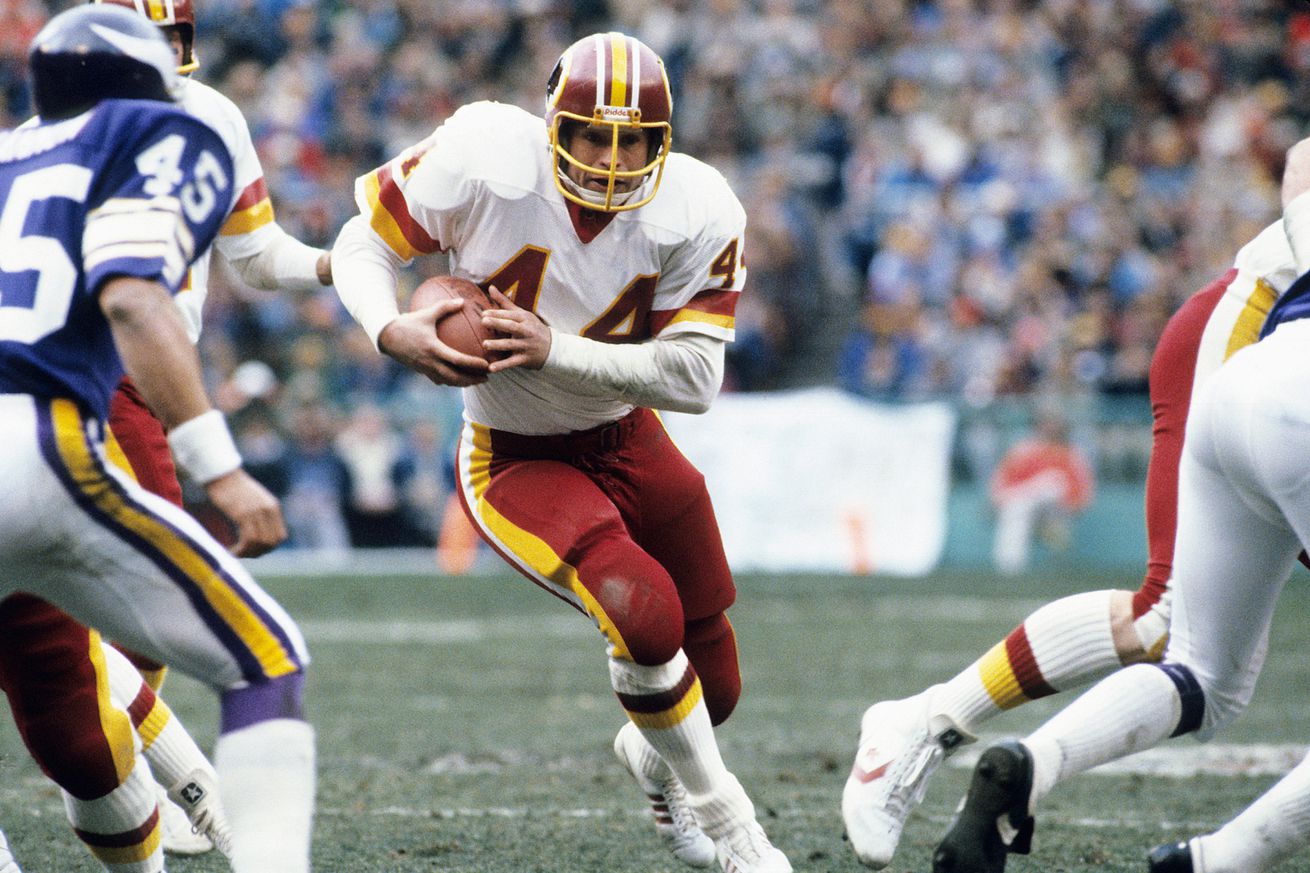 This week, John Riggins and the Redskins are hungry for a rematch against the Cowboys – but they’ll have to beat the Vikings in the second round of the NFC Playoffs first!

I won’t lie—I’m tempted to do a preview this week.

The Redskins showed some real heart in Week 13, traveling to Carolina and more or less dominating the game after the Panthers’ first two offensive series.

With nothing more to play for than pride, pride was enough.

The offensive line stepped up and opened holes for Derrius Guice (who had a breakout game that included a classic stiff-arm), Adrian Peterson, and Chris Thompson.

More than that, the defense, including a couple of guys I admittedly had never heard of before Sunday, kept Christian McCaffrey and company in check after the early part of the first quarter. They capped the win with an inspired goal-line stand.

To be perfectly clear about this—I’m not in the camp of fans who wants to see this team lose. I never will be. Yes, I want Bruce Allen to ride off into the sunset. Yes, I agree that Dan Snyder’s tenure has largely been a two-decade-plus disaster interrupted by brief periods of cruelly tantalizing glimmers of hope.

But I’m not going to root against them. The Redskins getting the #3 pick, as opposed to, say, the #7 or #8 pick, won’t make any real difference. The key is what happens in the front office, regardless of where the team picks.

For those who are rooting against the Redskins because they think it will hasten Allen’s departure, I get that—but I’m guessing even the most jaded fan would rather pick tenth with a new GM than pick first with Allen.

With all of that said, I’m still in the same position I was last week. Since I switched the format of this column, the Redskins have done nothing but win. Sure, it’s only been two weeks, but I’m not stopping now.

Thus, no Packers preview. Instead, I present to you this week’s Redskins alternative.

Preview: Ok, for those of you who weren’t around in 1982, the above line of text may be a bit confusing. Here’s the short(-ish) version.

In 1982, a players’ strike interrupted the NFL season, erasing nearly half the schedule. Teams played only nine of their 16 games. As a result, the NFL decided to alter the playoff format on a one-time-only basis, under the theory that good teams shouldn’t be excluded based on a small sample size of games against a wildly skewed or unbalanced schedule (for example, the Packers never even played their arch-rival Bears in 1982).

As such, the NFL dumped divisions, of which there were six at the time. The top eight teams in each conference made the playoffs, regardless of division, for an all-time largest playoff field of 16 teams. Incidentally, this necessitated that the eight-gme first round weekend of the NFL “Super Bowl Tournament” be carried via regional coverage (akin to the regular season) for the only time before or since.

The Redskins were the clear #1 seed in the NFC, posting a league-best 8-1 mark. Their only loss came at the hands of the dreaded Cowboys, who wound up as the #2 seed at 6-3. But back to the Vikings.

Minnesota was the four-seed after going 5-4. They had edged the Falcons 30-24 in the first round, while the Redskins had pounded the eighth-seeded Lions 31-7. Minnesota and Washington had been scheduled to meet during the regular year, but the game was the last to be canceled due to the strike.

Curiously, the Vikings decided to taunt the Redskins heading into the playoff game, saying that they would be the “butchers” who would slaughter the Hogs once and for all.

This was a bad strategy.

I’m getting ahead of myself, though. The Vikings were a solid team, led by longtime coach Bud Grant, who had previously guided the Vikings to four Super Bowls (but lost all four). Corner Willie Teal (4 INT), defensive end Doug Martin (11.5 sacks), and Pro Bowl linebacker Matt Blair anchored the defense, while quarterback Tommy Kramer and fullback Ted Brown (who had nearly as much rushing yardage as Riggins during the nine-game regular season) paced the offense.

I don’t think I need to talk much about the 1982 Redskins. Chances are, anyone who has read this far into an article like this one knows this team by heart. Joe Gibbs. Riggins. Joe Theismann. The best offensive line in football—Joe Jacoby, Russ Grimm, Jeff Bostic, Mark May, George Starke, with tight ends Don Warren and Rick Walker. Plus all-purpose back Joe Washington and the Smurfs—wideouts Charlie Brown, Alvin Garrett, and Virgil Seay, who had to step up when Art Monk broke a bone in his foot in the final game of the regular season that took him out of the playoffs.

On special teams, returner Mike Nelms was a Pro Bowl player, but, and I’m not making this up, kicker Mark Moseley was the MVP of the NFL, setting a couple of then-NFL records for kicking, and putting a bizarre cherry on top of what was already a strange season.

Here’s the game, from January 15, 1983, as the Redskins looked to knock off the Vikings to get to a rematch with the hated Dallas Cowboys in the NFC Championship game. As per usual, I won’t spoil the final result, but what I can tell you is that the Hogs took the Vikings’ trash talk personally. You can probably guess the rest—if you don’t already remember it.