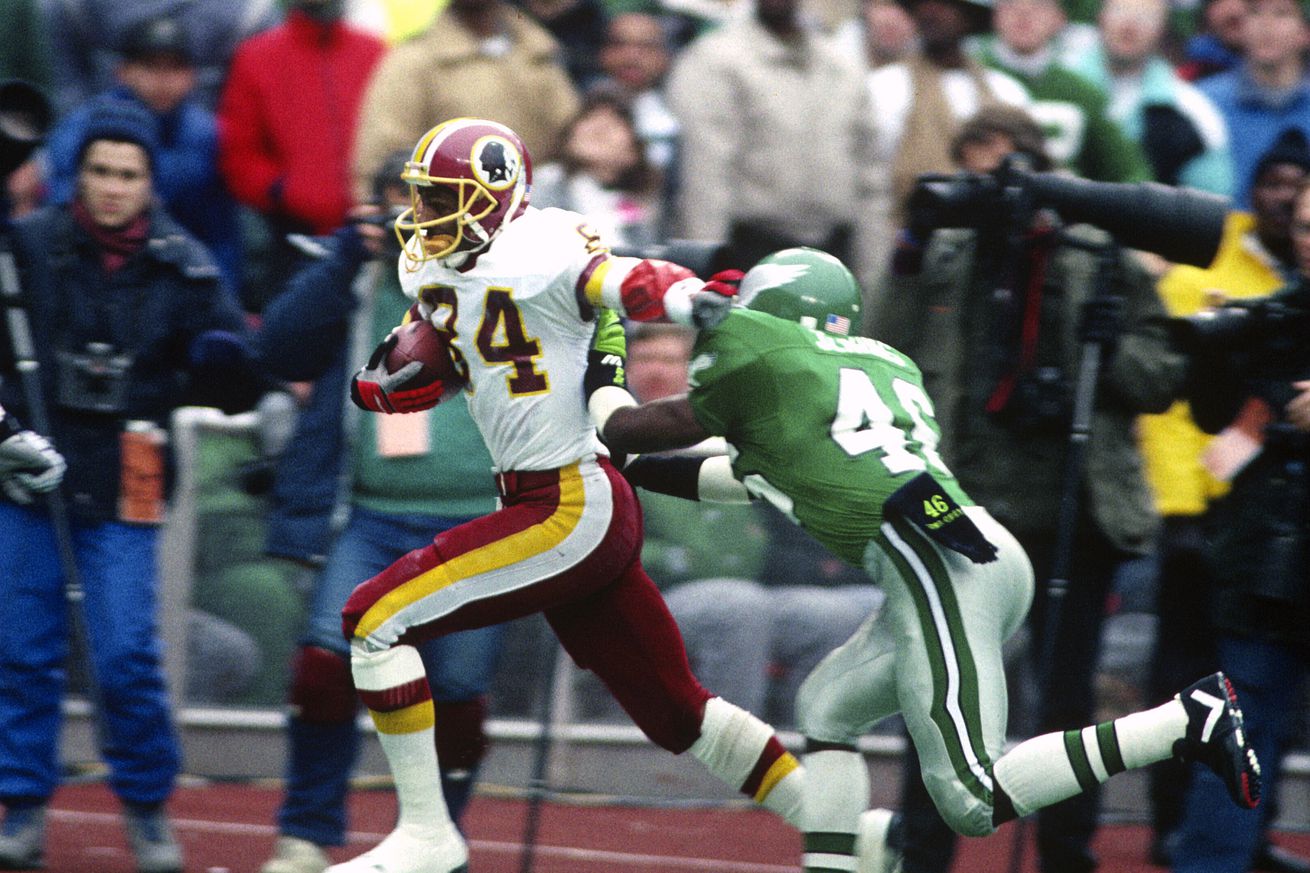 Meanwhile, in 1990, Gary Clark and the Redskins battle the Eagles in a bitter playoff grudge match

The Redskins came up short against the Packers last Sunday, but they again played tough and showed resolve in a 20-15 loss to the Packers.

Nonetheless, the defeat finally put an end to the faint Redskin playoff hopes, prolonged unnaturally by the abysmal state of the rest of the NFC East. With that, reality has set in, and most fans are focused on looking toward next season, minor media feuds, and, most importantly, the fate of embattled team president Bruce Allen.

Naturally, this column will cover none of that. Nor will it discuss Sunday’s match-up against the Eagles.

Actually, I will talk about the Eagles—just not these Eagles, as I present another weekly alternative to the Redskins’ current, less-than-ideal reality.

Preview: In order to understand the significance of this game, we have to go back even further, to Monday night, November 12th, 1990.

That was the night the Eagles defeated the Redskins 28-14 in the infamous “Body Bag Game.” Washington lost nine players to injury, including both of their quarterbacks, with five players actually needing to be carried off the field.

Rookie Brian Mitchell (who, as many of you undoubtedly know, played quarterback in college) wound up playing QB down the stretch, even leading the Redskins to their second touchdown—which he scored himself. Incidentally, this game led to the NFL creating the rule by which teams could dress a third, emergency quarterback.

In any event, Eagles players taunted the Redskins, with one asking “Do you guys need any more body bags?” (which is obviously how the game got its name), and another shouting, “You guys are going to need an extra bus just to carry all the stretchers.” Post-game, Eagles defensive tackle Jerome Brown said of the Redskins, “They acted like they didn’t want to play us anymore.”

None of this sat well with Joe Gibbs, but Gibbs was also never going to respond. That wasn’t his way. He didn’t take any of the media’s bait in the days after the game, nor in the days leading up to the January 4, 1991 playoff rematch, offering Philly no bulletin-board material whatsoever.

In the wake of the prior meeting, Buddy Ryan’s Eagles appeared to have a huge psychological edge over the Skins after such a physically punishing victory. Philly wound up 10-6, the same as the Redskins, but got the fourth seed in the NFC Playoffs to Washington’s #5. That meant that not only would the Redskins have to avenge the Body Bag Game, they would need to do so in Veterans Stadium.

This wouldn’t be the banged-up team of two months earlier, though. Mark Rypien, who had missed the Monday night game altogether, was ready to go. So was the rest of the Washington team, which included Mitchell, Earnest Byner, Joe Jacoby, Jim Lachey, Art Monk, Gary Clark, Charles Mann, Darrell Green, Wilber Marshall, and numerous other familiar names.

With the Redskins having a whole lot to prove, and the Eagles looking to give Washington another beating, here’s that 1990 clash between the Skins and their bitter divisional rival: