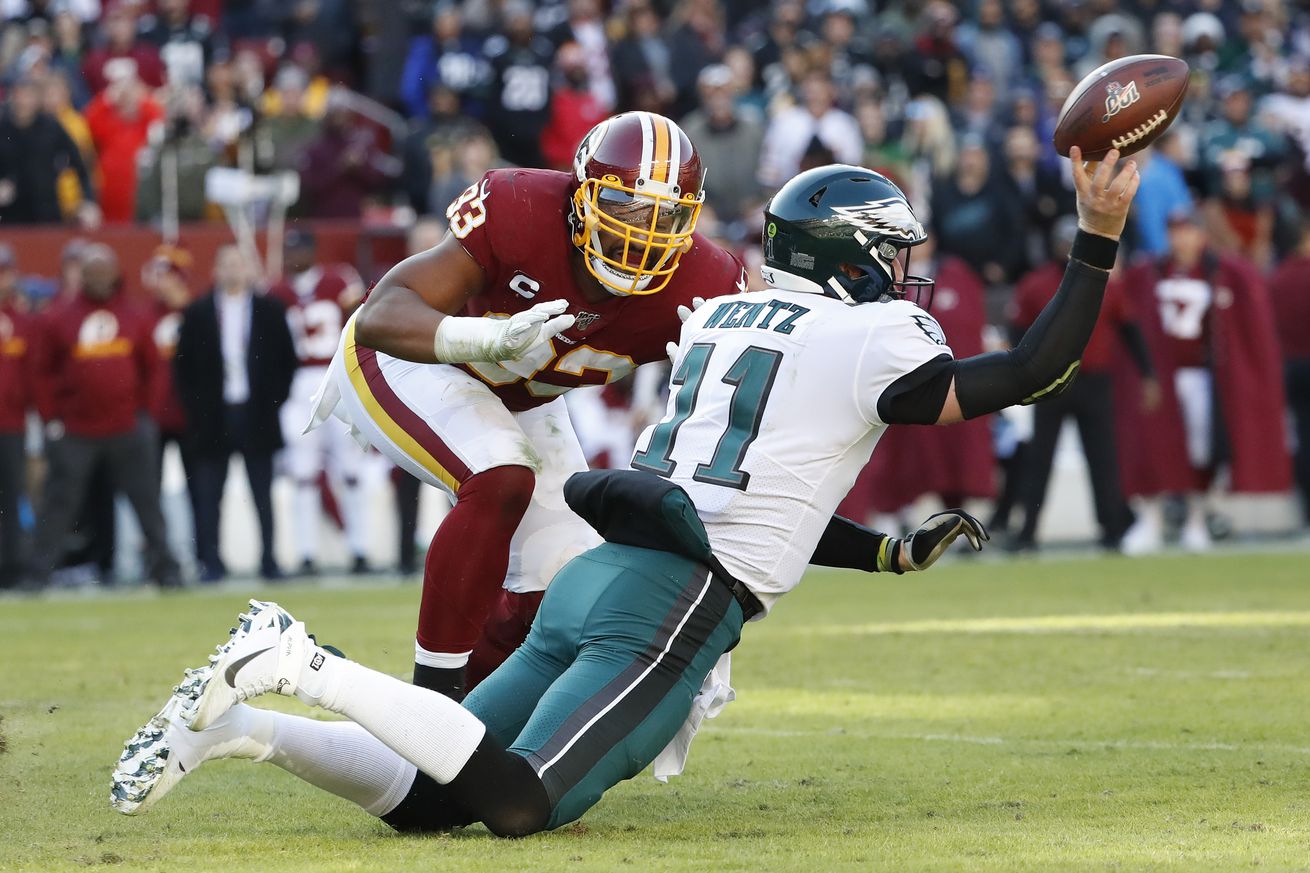 Washington had nothing to play for but pride on Sunday at home against the NFC East rival Philadelphia Eagles.

And play with pride they did, as the Redskins played one of their better games of the season despite falling 37-27, although it would’ve been 31-27 if not for a garbage-time touchdown.

The Eagles had lost three of their past four and barely squeaked by the New York Giants in overtime the week before on Monday Night Football, though they were still tied record-wise with the Dallas Cowboys for the division lead. Meanwhile, Washington entered the game last in the NFL in points per game (14.5), yards per game (262) and 3rd down percentage (27.3%).

After Washington went three-and-out to start the game, Philadelphia manufactured a 16-play, 88-yard drive, though the Redskins locked down in the red zone and forced a field goal.

Moments later, a pair of rookies and college teammates connected for Washington’s first score on the first play of its second drive as quarterback Dwayne Haskins Jr. hit wide receiver Terry McLaurin for a 75-yard score. Their former coach at Ohio State, Urban Meyer, was in attendance Sunday in a suite, as some have speculated the highly regarded college coach could lead the ’Skins next season.

On the next drive, Philadelphia’s Carson Wentz extended his touchdown pass streak to 17 games, the longest active streak in the NFL. He entered the game with 220 pass attempts — an average of 44 per game — in his previous five games.

Wentz finished with 266 yards and three touchdowns on 30-for-43 passing while Haskins had the best performance of his young career as he had 261 yards and two touchdowns on 19-for-28 passing despite a few drops from his receivers.

A few defensive miscommunications hurt Washington, and the Eagles moved the ball at will on third down, where they went 11-for-16. However, Philadelphia was outgained in yards per play (6.9 to 5.7) and yards per pass attempt (8.6 to 5.7).

Despite this time disparity, the game was knotted at 24 with under seven minutes to play. The Eagles were marching before Wentz lost a fumble, his 44th since 2016 — the most by any NFL player in that span. Washington took the lead with a 43-yard field goal from Dustin Hopkins, but Philadelphia wouldn’t go away easily.

FedEx Field erupted in cheers from Philadelphia fans with 26 seconds to play as Wentz found wide receiver Greg Ward Jr., who beat cornerback Josh Norman, for a touchdown. The drive was Wentz’s seventh-career game-winning drive in the fourth quarter or overtime. Philadelphia closed the game with 24 scores in its past 24 red zone trips.

In desperation, Haskins attempted a lateral that was scooped up by a Philadelphia defender and returned for a touchdown, which made the official final score 37-27.

Washington fell to 3-11 while the Eagles improved to 7-7. Next, the Redskins face the Giants (3-11) while Philadelphia hosts Dallas in a game that’s sure to have a monumental impact on the NFC East race.