Brandon Scherff has played the final game of his Redskins rookie contract. The team placed its top offensive lineman on IR Tuesday, per Adam Schefter of ESPN.com (on Twitter). 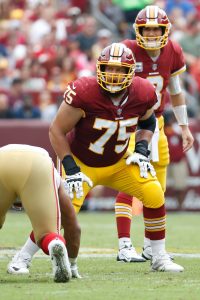 The fifth-year guard is in line to be one of the top free agents on the 2020 market. Washington has the option of the franchise tag. Teams have not been big on tagging guards this decade, with the Patriots’ 2011 tag for Logan Mankins being the most recent such move. But with the team expected to move on from Trent Williams, it might place a greater emphasis on retaining Scherff. An offensive line franchise tag is expected to cost just more than $15MM.

The Redskins and their Pro Bowl blocker did not progress far in contract talks previously. With the guard market recently spiking past $14MM AAV, via Zack Martin and Brandon Brooks extensions, a two-time Pro Bowler who will be set for an age-28 season will be a threat to eclipse that on the open market. It would likely take a massive commitment to keep Scherff from hitting free agency.

A 2015 top-five pick, Scherff missed time because of elbow and shoulder injuries this season. His 2018 slate came to an end early because of a pectoral injury. He’s started 65 games for the Redskins, making the Pro Bowl in 2017 and ’18.