Derrius Guice‘s season is officially over. The Redskins placed their young running back on injured reserve with a knee injury today, a source told Ian Rapoport of NFL Network (Twitter link). 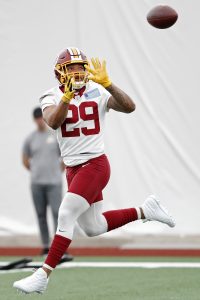 Rapoport tweeted earlier today that the official diagnosis was an MCL sprain and that the team would be cautious with him, so this isn’t too surprising. Fortunately, his ACL was spared. Guice has had some brutal injury luck during his brief time in the NFL, as this is at least his third significant knee issue since becoming a pro. Washington drafted Guice in the second round last year, and he tore an ACL during his first preseason.

The initial ACL tear didn’t heal right, and resulted in multiple infections and an extended recovery. He was able to battle his way back to make it back on the field for Week 1 of this season, and promptly went down with another knee injury. He was placed on injured reserve, and then activated after sitting out the required eight games.

During the five contests he ended up appearing in this season, he mostly split time with Adrian Peterson. He had a breakout game two weeks ago in Washington’s win over the Panthers, carrying the ball ten times for 129 yards and two touchdowns. Guice obviously has a rough injury history, but he won’t turn 23 until June and he’s obviously still high on talent. The latest MCL issue isn’t considered serious, and he should have a good chance of being the Redskins’ featured back next year if he can stay healthy.