The Redskins have placed linebacker Ryan Kerrigan on injured reserve, interim head coach Bill Callahan says. With that, the veteran has played his final game of the season, and possibly his final game in Washington. 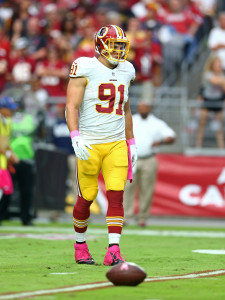 Kerrigan remains under contract for 2020 with a base salary of $11.5MM, but it’s completely non-guaranteed. The Redskins could, in theory, walk from the 31-year-old (32 in August) with no fiscal penalty and put those resources elsewhere.

The 2011 first-round pick missed the first game of his career in Week 13, thanks to a concussion. With his his 139-game streak over, he returned to action against the Packers, only to suffer an injury after sacking Aaron Rodgers.

At 3-10, the Redskins are currently slated to pick No. 3 overall. They’re also projected to have $40MM+ in cap space.