While the Redskins finally seem ready to discuss Trent Williams, they are also eager to see if a taker for Josh Norman‘s contract emerges. Washington has called teams about the veteran cornerback, Tom Pelissero of NFL.com tweets. 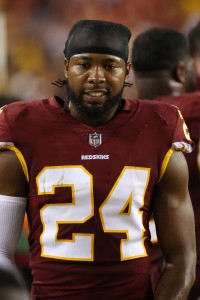 Obstacles stand in the way of a possible deal, however. Norman is due nearly $6MM over the rest of 2019 and has battled hand and thigh injuries, missing Week 7. Norman played last week against the Vikings, however. The former Panthers All-Pro also has not lived up to the $15MM-AAV contract he signed in 2016.

Pro Football Focus grades Norman as its No. 98 overall corner (out of 112 full-timers), further sliding him down the cornerback hierarchy. Norman will turn 32 in December and is signed through the 2020 season. It would cost Washington just $3MM in dead money to release Norman in the offseason, and the move would save the franchise $12.3MM.

This marks the latest Norman trade rumor; a report last week indicated the eighth-year defender was being floated around. With the Redskins sitting at 1-7 through the first half, it makes sense for the team to consider dealing veterans not part of the long-term picture.