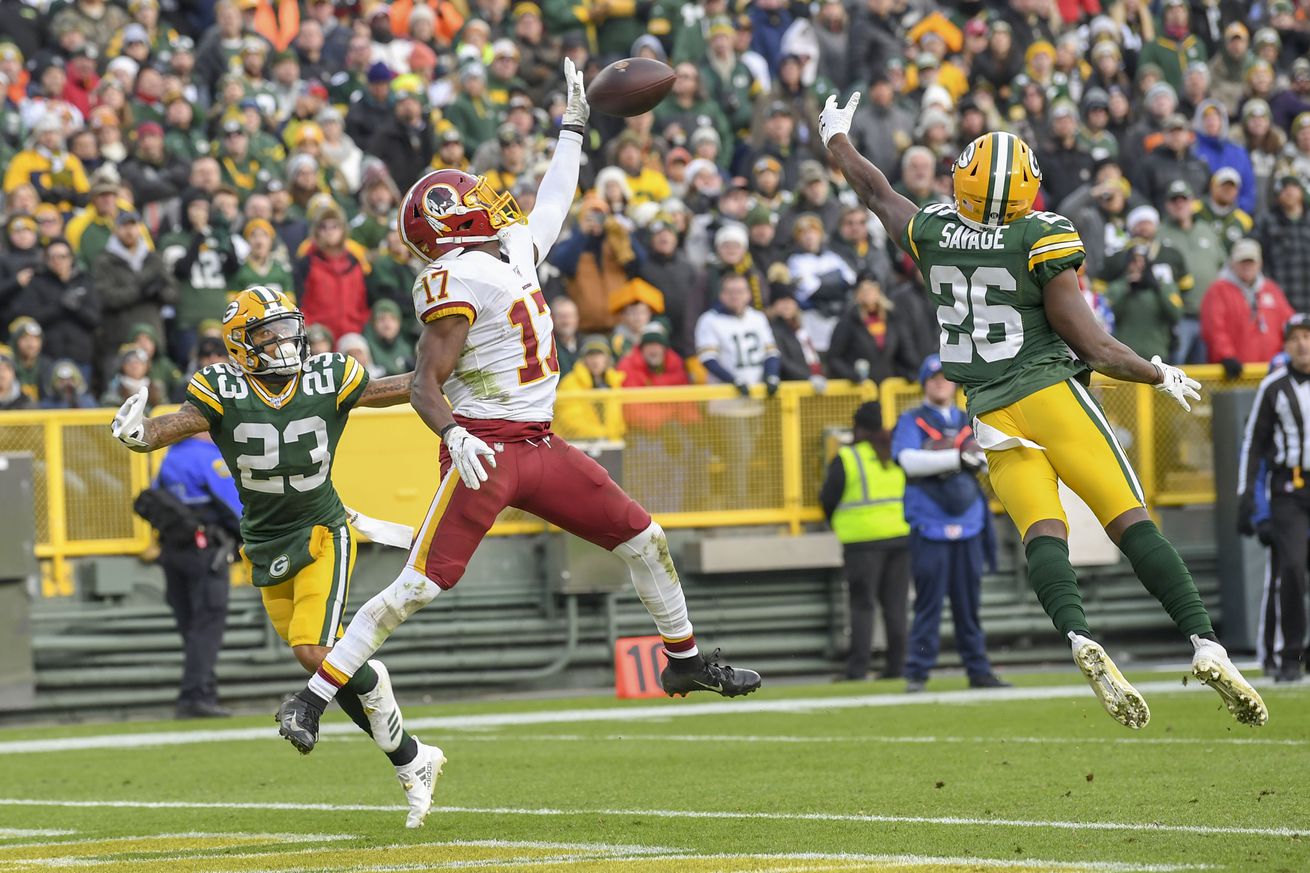 I saw this tweet after the Packers game, and thought that it was exactly right.

Terry McLaurin with that catch of the year.

But, any Redskins fan who has been turning on the games this year has to have been terribly impressed with Terry McLaurin, starting with the first game of the year. He has been amazing in stages, and, like sequels to a popular movie, he has kept finding ways, each time we see him do something amazing, to somehow be more amazing the next time.

He has become so amazing, in fact, that some of his highlights from early in the season seem… routine… by comparison.

Let’s revisit his first touchdown of the season, which came in the opening game in Philadelphia.

Terry Mcaurin with the huge TD for the #Redskins. I’ve been telling y’all about him! pic.twitter.com/3xZwBeLNU7

“And now you know why Washington calls him Scary Terry…”

A sixty-nine yard touchdown catch in his first-ever NFL game?!

Are you kidding me?!

Terrible Terry caught 5 passes in that game, going for 125 yards and a touchdown. Redskins fans had someone to be excited about, despite the opening game loss. Anyone could have been forgiven for thinking that the rookie wasn’t special, though — that he had simply been lucky enough to get past his man for one play. After all, for as exciting as the play was, Terry was running wide open in the middle of the field. All he had to do was not drop the ball.

Still, for a lot of receivers, this could have ended up being his career highlight.

But not for Terry “the Terror” McLaurin. Week 2 versus the Cowboys he caught a 27-yard pass on a touchdown drive and later added a touchdown catch of his own. In Week 3 at home against Chicago, he caught a career-high 6 passes, going for 70 yards and a TD, becoming the first player in NFL history to catch at least 5 passes, surpass 50 yards, and make a touchdown catch in each of his first three games in the NFL.

By the end of Week 3, Terrible Terry was the Redskins offense. It was clear that he and Case Keenum had a special connection, and McLaurin was on pace for a thousand-yard rookie season.

That mark was threatened when McLaurin sat out the Week 4 game with an injury.

In Week 5, he was kept out of the end zone for the first time in his career by the Patriots defense but still managed to average 17 yards per catch on three receptions. All the attention after this game, though, was on the coaching staff, not the players. Still, it was a credible effort by McLaurin, catching passes from Colt McCoy — his third quarterback of the season.

By the way, even now, after 46 catches in 12 games, Terrible Terry is averaging 15.3 yards per catch.

The catch.@TheTerry_25 six touchdown receptions this season ties the second most by a rookie in franchise history. pic.twitter.com/QDbiR30uBH

With three games left in McLaurin’s 15-game season (remember he missed Week 4 with injury), he is on pace for nearly 900 yards and more than 7 TD catches. And, while he himself is responsible for a big miss on a ball that sailed between his hands in the game against the Panthers, McLaurin’s dip in production from his blistering fast start in the first 5 games of his career seems to have a lot more to do with the Redskins quarterback situation.

Mid-season, Case Keenum was dealing with an injury that seemed to affect his accuracy, and Dwayne Haskins has struggled with accuracy in nearly every game, missing Terry on several passes — some of which would have been sure touchdowns. Furthermore, Haskins seems to have more chemistry with receiver Kelvin Harmon, whom Haskins has known since high school, and with whom Haskins works out in the off-season.

Still, Terry McLaurin is set to have what anyone would consider a successful statistical season for a rookie.

Picking back up in Week 6, having fallen off of his early season pace of one TD per game, and with Keenum back under center following Jay Gruden’s dismissal, McLaurin needed two TDs against the Dolphins to regain his 1:1 production, and he got them.

The first TD was pretty impressive.

Hell of a route by Terry McLaurin. Love the head fake before he breaks back outside. Keenum finds him for the TD #Redskins pic.twitter.com/6HcNVrHOli

The second was, by this time, pretty routine. Just Terry McLaurin running wide open on a 31 yard pitch and catch for 6 points. Yawn.

In the Mud Bowl game against San Fransisco, the Redskins offense was moribund and the 16-pound ball was too much for Case Keenum to throw very far. McLaurin had what is, to date, the only single-catch game of his career, going for 11 yards.

After back to back games against the Vikings and the Bills in which Terry had exactly 4 catches for 39 yards in each, he had his second “catch of the year” against the Jets, this one thrown by Dwayne Haskins, who seems to have no fear of “tight window” throws.

Honestly, after watching Terry McLaurin come down with that ball on that highly contested catch, I thought it was likely to be his career highlight — no matter how long he played football. Even playing for the Redskins, who, at that time, had only a single win on the year, people were starting to notice McLaurin. This was another ESPN Sports Center highlight. This was the kind of play that makes fans of other teams notice.

By contrast, this really nice catch between two defenders in the Lions game seems almost like nothing special. I said “almost”. Again, Haskins seems fearless, and trusts his receiver to make the catch.

Haskins finally finds McLaurin on a shot down the field. Hits him in the hole between the CB and S in Cover 2 #Redskins pic.twitter.com/lAlFLYpMvs

So, we’ve seen Scary Terry run a burner downfield against the Eagles, and run some beautiful routes to get open all season long. We saw one of the toughest contested catches of all time against the J-E-T-S. Surely the rookie had nothing left to show the world?

Well, it turned out that he had more. This week against the Packers, With Haskins putting the ball where only his receiver could possibly have a chance at it, McLaurin put up his latest highlight — a one-handed, 360-degree pirouetting snag in the end zone for a touchdown that the Redskins badly needed.

Once again, Terry McLaurin did something incredible, and made it seem routine.

Watch the end of the play. Terry doesn’t whoop or holler; he doesn’t spike the ball or give it to a fan in the stands. Terry doesn’t even take the ball to the equipment manager to save for his trophy case. The Redskins are, after all, losing the game. He finds the official standing in the end zone, hands him the ball, gets a few high fives from some teammates, then gets back to work.

This is an all-time great catch and Terry McLarin, in just 12 games, is already looking like an all-time great Redskins receiver. If this play had been made on a bigger stage — say on a Monday night game or a playoff game — it would have been celebrated by all NFL fans and replayed endlessly on ESPN and the NFL Network for years. As it is, it is likely to be talked about by Redskins fans long after Terry McLaurin’s seemingly long and successful career has finished.

That is, unless the third-round rookie does something even more spectacular in the future.

Here’s a view of the @TheTerry_25 TD that I can guarantee you haven’t seen. I know a guy. #HTTR pic.twitter.com/qOVF0wZoaR