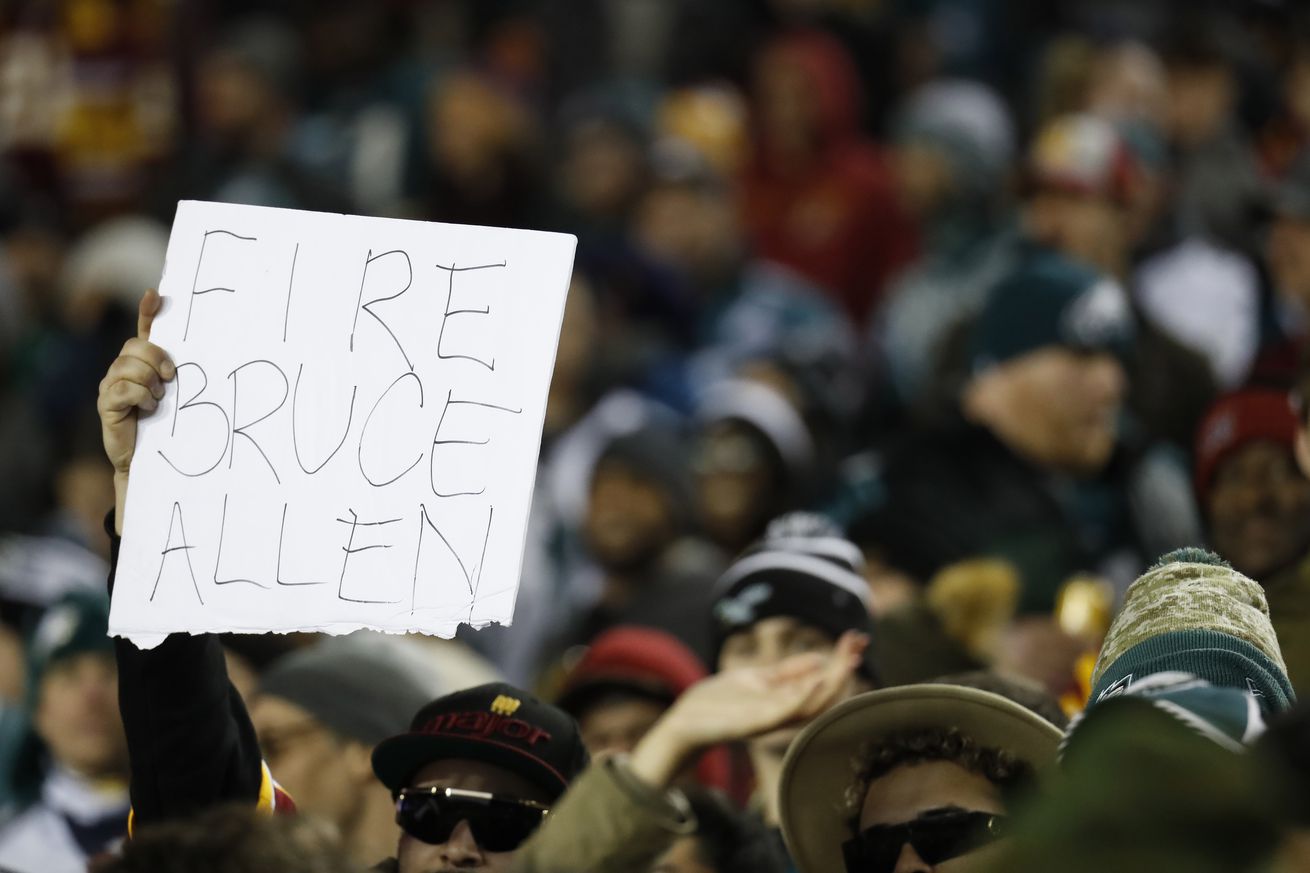 #Redskins kicker Dustin Hopkins has a heartfelt message for fans after getting their first home win in over a year: “I’m sorry the fans had to wait this long…I know its been tough…thank you for sticking with us thus far.” #HTTR #RedskinsTweetTeam @3ptCnvrsn pic.twitter.com/NadvFt4DXs

There should be an award for a coach that manages to botch clock management this badly at the end of both halves. https://t.co/hsqZfGRJN8

The Redskins are paying a lot of $$$ to players who are not contributing between the lines this season.

Well we got the W and a Little Fan got to see his Favorite Player and Role model words can’t express what you mean to him Thanks so much @tim_settle #97 LPD #HTTR pic.twitter.com/j4aQEEF5UD

.@dh_simba7 made a special visit to meet Miles, one of his biggest fans and deliver a game ball. pic.twitter.com/pxhAJXMIIa

The play didn’t work because of a rushed throw. But man this was a good design. Three defenders eye Sims at the snap. Speed. Playmaker. They knew. Creates confusion and traffic. McLaurin creates gap by using LB as a pick. Slay runs into a teammate. Open. Tough miss. pic.twitter.com/rJHbGljY04

Think this is wrong everyone is either in the middle ground or thinks he can’t play nobody is crowning him it’s the ones already saying “bust” that need to go https://t.co/tBXOdkPg9r

Was going to highlight this play, but I see Brandon beat me to it. Great job by Scherff working the double team up to the LB then peeling off to pick up the LB. nice run from Guice too, showing patience to allow Scherff to get the LB then bursting through the hole https://t.co/4TcRSFDUzh

#Redskins need to get Steven Sims more involved. He’s progressing nicely and they designed some stuff for him vs the Lions, but they can and should do more. Electric with the ball in his hands. Drops the kick off here but then picks it up and proceeds to take it for a TD pic.twitter.com/bJcwxfPd7N

Josh Doctson’s time in Minnesota has come to an end without the wide receiver recording a catch.

For those who watched Carriker LIVE yesterday, here’s a picture of Carson falling asleep last night. He’s the 9 year old boy that’s being bullied at school & even at his own birthday party for being a Redskins fan. Thank you for supporting him, his faith has been restored! pic.twitter.com/Tok93YLHQM

It’s fair to wonder, given everything Jerry and Stephen Jones have said this week, whether Jason Garrett could be fired on Friday if the Cowboys lose on Thursday https://t.co/XEOcL9tcI9

Looking at the top 5 salary charges for each team in 2020 and how much flexibility they have with the salary cap https://t.co/ps1hsPhQuI pic.twitter.com/rmAVbtvfvb

The Rams, Falcons, and Eagles all have a lot of cap space tied up in just a few players next year and not much flexibility to change that mix https://t.co/ps1hsPhQuI

The #Rams have $95.05 million in cap charges next season for Goff, Donald, Gurley, and Cooks

#Redskins down to 4th overall pick after win over the Lions. https://t.co/CSvu8sZkGo

Lamar Jackson is now the odds-on NFL MVP favorite (1-3) after opening the season with 75-1 odds. At 22 years old, he would be the youngest QB in NFL history to win MVP.

I have never seen anything like Lamar Jackson. Ever.

Tips to front offices trying to draft the next Lamar Jackson:

Also, be prepared to pay for OC Greg Roman, whose creative genius makes it happen.

And make sure your HC is completely cool w doing something everyone else in the NFL thinks is foolish.

It is incredibly gutsy to do what the Ravens did on offense.

The NFL is a league where the outsiders either succeed completely or fail completely, there is no in between.

The Ravens have a unique offense built around a unique player.

Every time Lamar Jackson has a monster game and does something incredible, I just remember this image of he and his mom at the NFL Draft waiting for him to get picked. pic.twitter.com/6PiyrvARXB

We’re heading into Week 13 with a full slate of 16 games – here are the referees for each: pic.twitter.com/yXZsjMyOto

last year, i went on a date with a dude and when i told him i was reading Animal Farm again, he laughed obnoxiously for an entire minute and said i was too old to be reading children’s books.

i think about that a lot.

…i wonder if he’s still an idiot.

Legal Twitter: I’m dressed in a black suit outside a restaurant waiting for a friend and a curmudgeonly gentleman pulls his sports car into the driveway. While walking past, he dismissively looks at me and barks “Key’s in it.”

The Porsche is now mine, right?