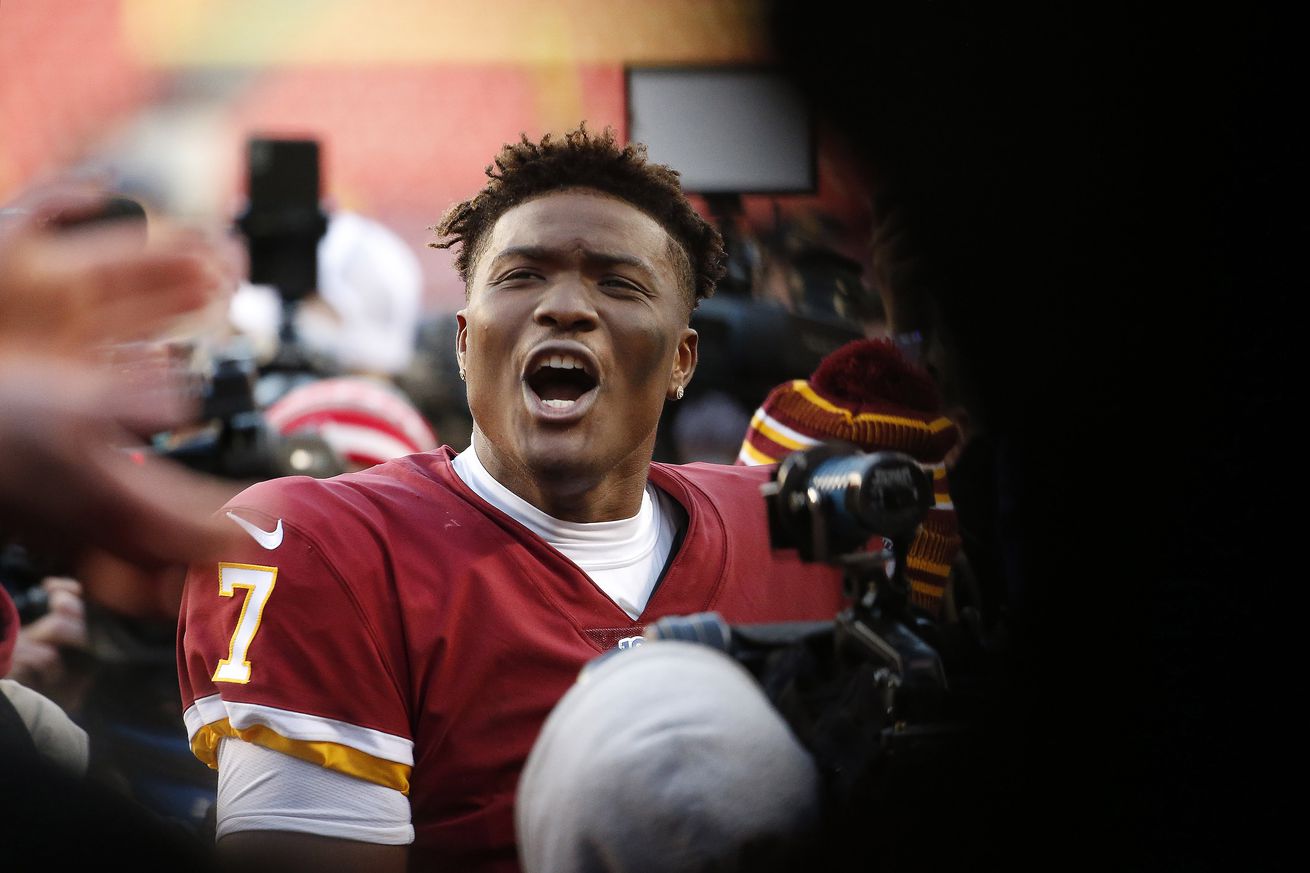 Who would have thought a game with teams with less than 5 wins between each other would provide so much drama? Here is what we learned from the Redskins victory against the Detroit Lions

The Redskins end the four-game losing streak and its nine-game home losing streak to the Detroit Lions this past Sunday. The game itself, although the teams were not good record-wise, was filled with drama to the final kneel down. The storyline behind the Redskins victory itself was on the younger players stepping up in a big way. Let us go ahead and dive into it though, here is what we learned from the week 12 matchup versus Detroit.

Separate fan emotion from team objectives – The 2019 Redskins coaching staff and their players are still trying to win, expect them to try and do just that in December.

Since the end of the game against the Lions, there has been much discussion about the point of winning this late into a lost season. Well, it can be this simple: Yes, at this point in the year, it is entirely fair for the fans to want the Redskins to lose its remaining games. However, no team has the mindset of playing for draft status when they step on the field. Most of the coaches and players are competing to win for many different reasons – interest in free agency, favorable status for the next coach (and possibly a new general manager), bonuses, coaching staff positions elsewhere, and other subtle causes that mean a lot to the individuals involved. Besides, the position is not settled yet; there are five weeks left in the season, Washington may very well stay in the top three draft status. Ok, now we can get back to more pressing matters.

Haskins is continuing to struggle throughout the game, and it is concerning. However, this week, he stepped up big in the fourth quarter, and it should be recognized.

When it comes to Dwayne Haskins, you can take moments from games he plays that tell you there “is” something there. You see it, we all see it; however, it is all for nothing if Haskins cannot produce consistently throughout the game. Last week I talked about Haskins being able to reduce his indecision on dropbacks, develop consistency in his base and throwing mechanics, increase his selective assertion as opposed to checking down so often, and increase urgency on third downs to extend drives. Well, for the most part, the struggles continued. The thing that was most impressive with Haskins throughout the game, though, he was able to improve on his decision-making, assertion, and mental processing pre-snap and during the play. At the point of the snap is where his base and mechanics caught up to him, he made the right reads mostly all day, but he was inaccurate as well.

Haskins entered the fourth quarter 7-17, 88 yards, and two turnovers. The production he had to that point was not good in the slightest. More importantly, throughout the game, the Redskins were 28 percent on third downs. His ineffectiveness throughout the game almost certainly was washed out after he stepped on the field trailing 16-13 late in the fourth quarter. Haskins was able to drive his offense down the field on two straight drives, using his arm and legs to get the team into field goal position. It eventually led the Redskins to its second win of the year, and Haskins first victory as a professional quarterback. The last two drives was a good – not great (overthrew McLaurin for go-ahead score) – performance by the rookie, who displayed the urgency and a killer mentality people like myself had asked for when he took over as a starter. He has a lot to work on, and nobody should give up or crown him just yet, but there is something there with him, and he has to work his way through the struggles.

Last two Redskins drives consisted of a 9-play/54-yard drive, 6-play/33-yard drive, & a .66 conversion percentage (2/3). Only faced 3 third downs on the two drives, which points to a highly efficient OFF on 1st & 2nd downs. It was on my mind so much I had to look at the film.

The offense has young and talented pieces in place, but 15 points per game is losing football offensively. It must rapidly improve before seasons end.

One may assume this is another sub-topic about Dwayne Haskins, but it is about the offense as a whole. The Redskins had good performances by its younger players in Derrius Guice, Kelvin Harmon, Terry McLaurin, and Steven Sims (special teams). The issue here continues to be undisciplined football and inconsistent coaching. Now, this week was one of the coaches’ better games schematically, and they got all of the looks they wanted. However, over the past three weeks in total, the Redskins offense is averaging 15 points per game. The league average is 22 points per game, 15 points would rank the Redskins 29th in the NFL, right alongside the Denver Broncos. One can point to talent, and talent does lack at tight end, and the offensive line has not necessarily helped Haskins since he has taken over. There are five games left in the season, and it will be significant to see how the offense performs against the Carolina Panthers and Green Bay Packers on the road.

Coaches may have saved the Fabian Moreau’s career in Washington by benching veteran Josh Norman.

The Redskins were going nowhere with or without Josh Norman, so, why not bench him? To be fair to Josh, he had been dealing with injuries throughout the year. He was forced at one point to play against Minnesota when he should not have been playing at all. Nonetheless, Fabian Moreau was struggling mightily at the slot position, and the narrative about his skillset at cornerback was that he was a terrible draft pick. He did not play slot at UCLA, and this week due to Norman’s benching, he got his chance to play at his natural position and produced two turnovers in his big start. If Moreau can improve weekly with Norman’s absence, it not only changes the narrative about the cornerback, but it changes the future of his career. Fabian can become a crucial piece to the Redskins defense, and may save the need to draft a premier cornerback in the draft. Though, with the lack of talent throughout the roster, should not ultimately come off of the board.

Lastly – Dwayne’s late-game antics was a mistake, should not go unaddressed by his coaching staff, but for fans and media, just let it go…

The young man just made a mistake and got carried away before confirming the game was over. It is true that it has never happened before in the NFL, so that is the news of it all. In the end, it is a non-story that should have never blown up to the level it did, let it go.