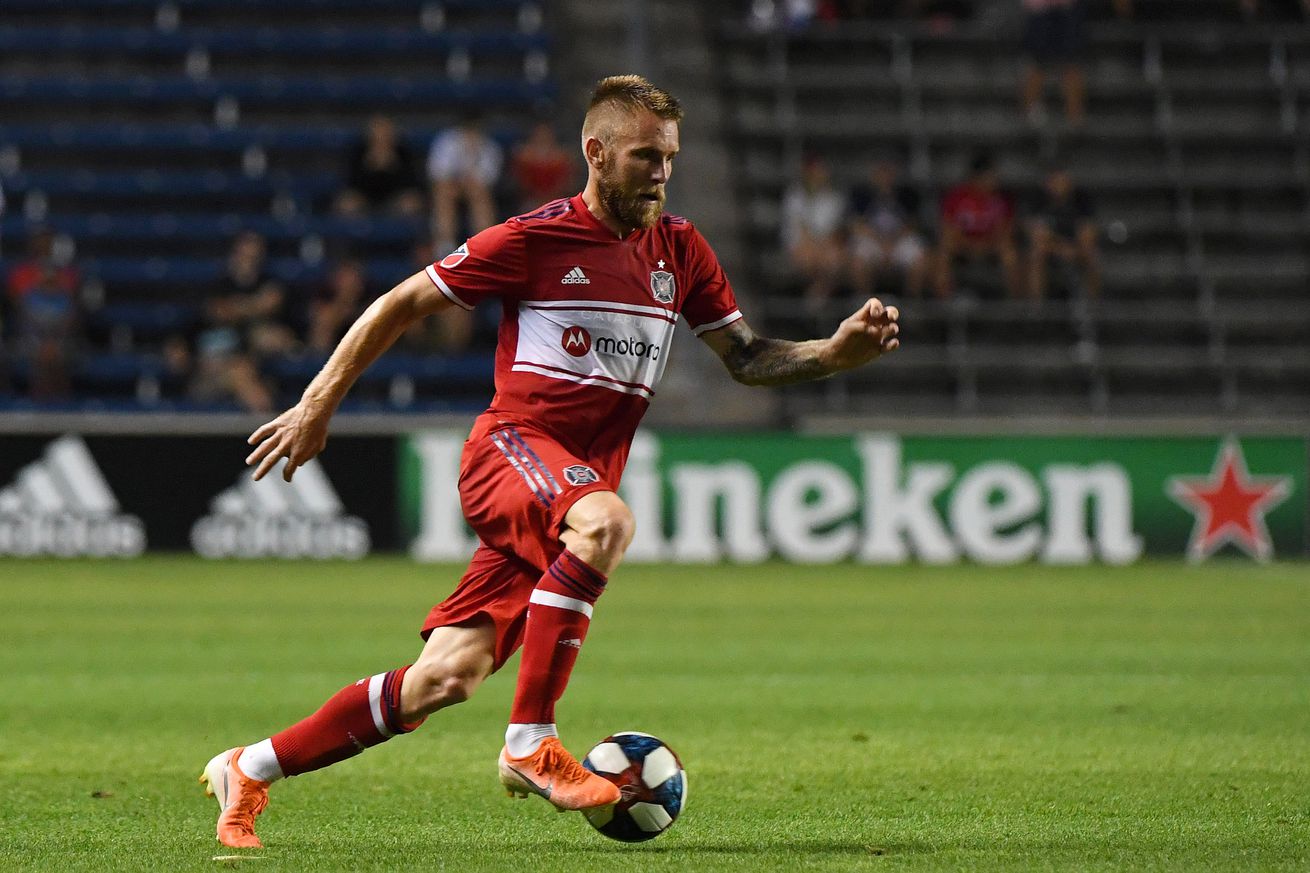 The complicated web of MLS player acquisition mechanisms is upon us, with today’s Waiver Draft kicking things off. D.C. United has the 15th spot to pick over players who were let go, but didn’t qualify for the league’s extremely restrictive version of free agency or the somewhat less stringend Re-Entry Process. We’ll find out shortly whether United opted to pick anyone up, but in the meantime, we put together a very quick, not necessarily deeply-thought-out list of prospects.

Again, this is for the waiver draft only. We’ll get into the Re-Entry Process (don’t call it a draft…even though it is a draft by league standards and was called a draft for years) tomorrow morning. Remember the rules here: if you take a player in the waiver draft whose option was declined, you’re picking up his existing contract as is. If he’s out of contract, you can negotiate a lower deal.

Why: United’s attack didn’t have enough difference makers this year, and while Yamil Asad is a good addition, D.C. can’t just add one good attacking player and declare the job done. In two seasons on Chicago Fire teams that were dreadfully managed on and off the field, Katai managed 18 goals and 12 assists despite totally erratic positional usage from coach Veljko Paunovic. He can create his own chances out of nothing, he can create for others, and he’d be comfortable with Ben Olsen’s preference for a lot of freedom of movement within the attacking midfield trio.

Katai’s salary is over the DP limit, but it’s safely within the range allowing United to use Targeted Allocation Money (TAM) to pay his cap hit down. At 28 years old, he’s already got experience with Serbia’s national team and in the Spanish top flight. Guys like that are generally only available in the waiver draft when they also have some sort of horrible injury history, but Katai appeared in 62 of a possible 68 games in 2017 and 2018.

Why not: That’s a lot of TAM to use this early in the offseason, and Katai would take up an international roster spot (which might be in short supply this year). While Katai is a really good attacking player, he might not be exactly what United needs at this point. With Paul Arriola, Yamil Asad, and Lucas Rodriguez in the midfield and Ola Kamara up front, the Black-and-Red need someone who is an ace at creating chances for others first and foremost. Katai does create — per American Soccer Analysis, his 8.1 expected assists ranked 9th in all of MLS this year — but he’s not really the type to set up a ton of chances on a regular basis. Katai sets up a few big chances rather than just a bunch of chances, essentially. This season, he had 1.2 key passes per game, and while key passes are an iffy metric (e.g. if you pass back to someone who keeps shooting from 35 yards out, you’ll pile them up), you’d still like that number to be higher with the players he’d be trying to fit in with here.

Why: United let Jalen Robinson go, and Chris Durkin is away on a loan that appears designed to end in a sale. Frederic Brillant, provided he re-signs, is 34. The Black-and-Red need another center back this offseason, full stop. Hilliard-Arce won 3 straight national titles at Stanford, captaining a couple of those teams, and was the 2nd overall pick in the 2018 SuperDraft. Top Drawer Soccer ranked him as their national Player of the Year after the 2017 NCAA season, and he was a close runner-up to Jon Bakero for the MAC Hermann Trophy.

Unfortunately for Hilliard-Arce — a dual US/Costa Rican citizen who has seen time in camp with Costa Rica’s under-20s — the Galaxy have been a train wreck in recent years, especially when it comes to bringing younger players on board. With no plan in place, LA gave Hilliard-Arce 5 scattered appearances (4 starts) in 2018, with some of those games coming out of position at right back, and Guillermo Barros Schelotto shunned him throughout all of 2019.

However, that lack of time stems from the Galaxy’s internal dysfunction, and a club-wide inability to evaluate defenders. Hilliard-Arce was highly rated on a Stanford side that prized a lot of the same traits Olsen values, and he’s got the mentality to embrace the challenge of fighting for his place here.

Why not: If Hilliard-Arce couldn’t beat out the also-rans LA has been fielding in the back, it stands to reason that either a) the people making the choices were dumb, or b) he was even worse than said also-rans. What if the Galaxy, for all their flaws, did get this one right? Hilliard-Arce wouldn’t be the first great college player who happened to hit his ceiling before moving up a level.

Why: Remember when Joseph Mora got hurt, and United spent weeks stumbling along without a left back? And then they changed to a formation that simply didn’t have that position, and it only did just enough to keep the season afloat?

Well, Acosta’s a cheap, young, domestic left back who has already received a senior USMNT call-up to go with numerous under-20 appearances, and he’s also the subject of an international tug-of-war between the U.S. and Honduras (who placed him on their Gold Cup roster only for Acosta to opt to not file for a FIFA allegiance change). He can also play defensive midfield, right back, and even center back in a pinch. You don’t find players like that in the waiver draft pool every year.

United could do an awful lot worse in trying to find a natural back-up for Mora, whose competition for playing time currently consists of two natural right backs (Oniel Fisher and Chris Odoi-Atsem).

Why not: There have been persistent, strong rumors of off-field issues with Acosta for the last two years. At Real Salt Lake, which generally has given their homegrowns genuine opportunities to succeed, he was firmly in the doghouse under Mike Petke in 2018 before being loaned to Orlando City in 2019. The Lions, despite being a debacle in the back, only gave Acosta 8 appearances and opted not to meet RSL’s asking price to make the move permanent.

In other words, Acosta appears from the outside to be one of those players who has plenty of talent, but questions about whether he’ll ever have his act together enough to succeed. He’s a big risk, and will take plenty of management from the coaching staff.

Why: Bakero is a 6’3” attacker with extremely high soccer IQ, and is one of the most technically gifted players to come out of college soccer in the last five or so years. As we mentioned, he beat Hilliard-Arce to the MAC Hermann Trophy in 2018, and was the key cog for the stylish soccer Wake Forest played at that time.

With United, he’d be a change of pace. Much like Rooney, he’d be more of a back-to-goal creative player up front, which is a major shift away from Kamara’s style of play. He could also slot in underneath Kamara in the 4231, and is just fine slipping passes in behind for runners, which is a need for United.

Bakero spent all of 2019 on loan with Phoenix Rising FC, who won 20 consecutive USL Championship matches this year. In Arizona, Bakero was a regular (26 appearances/22 starts, plus starts in both of their playoff games). He created 72 chances for Phoenix, good enough for second on the team, mostly as the most attacking member of their central midfield trio. Which is to say, he was first choice on one of the best USL teams of all time, so he’s probably ready for a bigger challenge.

Bakero would offer United something they never had in 2019: creative depth. That’s different from extra hustle, or extra speed. Too often, this team turned to the bench and could only offer fresh legs, rather than a different approach. As depth, Bakero would be exactly that.

Why not: Bakero is not fast, nor is he particularly mobile. That might not be a major issue on a team with the speed and quickness United’s other attackers will possess, but it can’t just be ignored either. It’s also telling that Toronto FC, a team that has a good handle on evaluating which players will break through in MLS or not, opted to cut him loose rather than keep him around.

With United’s impending international roster spot crunch, the opportunity cost of picking Bakero is also higher than other choices. Most likely, United would find themselves needing to acquire one more international spot down the road, which would mean some amount of xAM being traded as a result of keeping Bakero on the team.